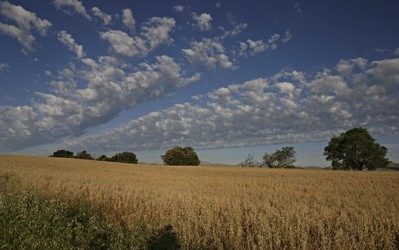 (Copyright by and reprinted with permission from Stephen McFadden.)

Waves of change have irregularly swept through the realms of food and farms over the decades. By most reckonings, another massive wave is building toward a crest, driven by oil prices, climate change, market speculation, genetic experimentation, human health corruption, corporate interest, and consumer demand.

In the context of these roiling factors, Chuck Hassebrook had a message for the audience at the Nebraska Sustainable Agriculture Society’s mid-February conference: “We can shape the next wave of change with sustainable agriculture.” But, he added, to do that we will need the same qualities of determination and perseverance as the pioneers.

Hassebrook is Executive Director of the Center for Rural Affairs (CRA). He also serves on the Board of Regents for the University of Nebraska, a powerhouse among America’s agricultural academies, where he is one voice for sustainability in an institutional chorus determinedly advancing industrial approaches to farms and food.

In his talk, he picked up on the theme of change in the historical period starting after World War II when the wave was propelled by power equipment, petroleum-based chemical inputs, and confined animal feeding operations (CAFOs). Initially those innovations made farm work easier and more prosperous.  But now, 60 years later, we must ask ‘what hath we wrought?’

There is a new wave of change now, Hassebrook said, but if we want a better sustainable future, we are going to have to take responsibility for creating it. “Each person has a moral responsibility to leave the land in at least as good a condition as it was when it came under their caretaking, and possibly even better,” he said. Then he offered three strategies. 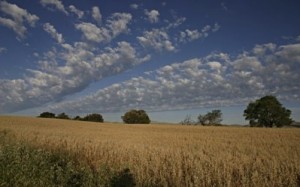 1. Sustainable agriculture needs to continue to check its authenticity and find ways to make it possible for small and mid-size farms to take a fair share of the market. Studies show consumers overwhelmingly trust family-size farms more than they trust the large corporate farms, especially when it comes to ethical treatment of human beings and animals.

We need to band together to market our products to get to a place where the majority of the people who do the work are also owners of the land. That’s what a family farm is.

In the era of the pioneers, the people who worked the land owned it. Not so much now. Instead, the corporations or people who own the land hire employees to work the land for them, and those employees are in the majority of cases poor.

Hassebrook’s observations put me in mind of Trauger Groh, my co-author for  Farms of Tomorrow (1990), and one of the founders of the Temple-Wilton Community Farm in New Hampshire. “If you work in nature with animals or with crops you have to take a deep personal interest in it,” Trauger told me when interviewed him for The Call of the Land. “The hired person cannot do this. A salary is insufficient motivation. We need another way.

“We have no employees on our farm,” Trauger told me. “We have partners. At the Temple-Wilton Community Farm our principle has been to run the farm by a group of independent farmers in association with each other, not employees…Employment is the last outgrowth of slavery. If you are employed, you have to work on order. The employer sets the tone and says what you must do. People won’t want that in the future.” 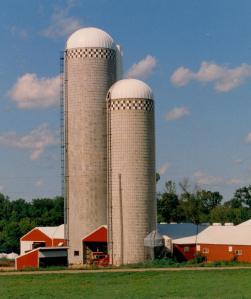 2.  The second strategy Hassebrook offered involves the role of sustainable agriculture in addressing climate change. As studies show, organic soil absorbs lots of CO2 from the atmosphere and fixes it in the soil beneficially, thus helping stabilize climate in an era of wildly dramatic change.

“America and the world need our participation in the debate on climate change, not just in Washington, but also locally,” Hassebrook said. “We need to talk with our neighbors. Lots of rural folk continue their disbelief in climate change and think they are being conservative. But there is nothing conservative about that position.  It is not a traditional value to put your head in the sand…If we continue to keep our heads in the sand, it may be too late to do anything about it. We need to take action now.”

In that regard the NSAS conference also heard from Abe Collins, an organic farmer who raises beef in St. Albans, Vermont, and is also the founder of New Soil Matrix. His talk was titled Soil Formation as the Basis of Environmental Security and Economic Development.

“Everything good comes from the soil,” Collins said. “That’s our basic assumption. Increasing soil carbon is the key to our environmental security, and to both urban and rural development.

For many years, Collins said, the common-knowledge maxim has been that it takes 1,000 years to build one inch of topsoil. But that is no longer true. We now know how, he said, build up to eight inches of topsoil a year to pull carbon out of the air and draw down dangerous CO2 levels in the atmosphere. “We can reduce CO2 levels substantially,” he said, “while enhancing ecosystems and increasing profits.”

3. Hassebrook’s third strategy was to rein in government subsidy of large farms so that small and mid-size farms can have a fair chance. The way it works now, he said, is the bigger you are the more government subsidy you get. As long as we keep the policies that support that approach we will not have the resources to invest in organic and sustainable approaches to the land.

In 2007, the Center for Rural Affairs did an analysis of farms in 13 leading farm states. They learned that in those states, just 260 of the largest farm operations received more money from USDA farm programs than all of the people and communities in all of the counties combined, a total of nearly 3 million people in over 1,400 municipalities. The reality of that gross imbalance shines a sharp light on the distortion government money has brought to the realm of food and farms, and shows why small farms struggle while huge, corporate farms prosper.

Woody Tasch of the Slow Money Alliance makes a similar point about lack of support for sustainable ag. He points out that only a tiny fraction of foundation assets are allocated to organic agriculture. “We have $500 billion of private foundation assets in the USA,” Tasch has written, “and less that 0.1 percent of that — just a few hundredths of a percent — goes to support sustainable agriculture.”

What it comes down to, Hassebrook said, is a choice about the impending wave of change: “We have got to limit what the big farms get. Direct payments usually go to land that is owned by a landlord and worked by poorly paid employees. We need to stop subsidizing the biggest and most powerful, and instead use those resources to support family farms, and to invest in the future of rural communities and the millions of people who live there.

In closing, Hassebrook referred to an editorial he had read a while back in the Omaha World Herald. “We can draw inspiration from the pioneers,” he said, “for they were people just like us: good and bad, poor and rich, successful and unsuccessful. But in general the pioneers had some important qualities. They had perseverance. They were visionaries. They made sacrifices to realize their dreams. They cared about each other and community. That saw what could be and did not let challenges dissuade them. They faced reality, and they were open to new ideas.”

Those qualities and attitudes, he said, are what modern-day pioneers of sustainable agriculture need now to shape the mounting waves of change in our farms and food.

At GoodFood World, we are concerned that many sustainable agriculture programs promoted by colleges, universities, and other training organizations could be more directed to small, independent farmers. Unfortunately some programs continue to further industrial ag with a new “green” twist; providing less training in organic or transitional farming methods and continued emphasis on high chemical input and biotechnology. It is especially difficult for young, beginning farmers and minority farmers to get the financing they need to become indpendent.

We strongly support the projects that Chuck Hassebrook and the Center for Rural Affairs are involved with.

Steven McFadden of Lincoln, Nebraska, is co-author of Farms of Tomorrow (1991), America’s first book on Community Supported Agriculture (CSA). He also co-authored Farms of Tomorrow Revisited (1998). A veteran journalist, he has covered agrarian issues for over 35 years. McFadden is the author of eight other non-fiction books, including Profiles in Wisdom, Legend of the Rainbow Warriors, and Odyssey of the 8th Fire.

To read this post – and more – on Steven’s blog, The Call of the Land.