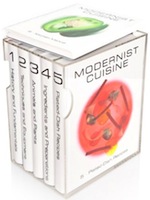 Here in Seattle, Nathan Myhrvold is known as one of the original founders of Microsoft, the founder of Intellectual Ventures, and a bit of a mad scientist. Until recently, he wasn’t particularly well-known as a chef and culinary expert.

That changed with the release of the  new book, Modernist Cuisine: The Art and Science of Cooking (The Cooking Lab, 2011), a six-volume set consisting of 2,348 pages of text and photography.

Scientist that he is, Myhrvold and his co-authors, Chris Young, and Maxime Bilet, have turned out thousands pages of kitchen magic that dig into the science behind the preparation.

An excerpt from Modernist Cuisine discussing The Complex Origins of Food Safety Rules, tells us:

All food safety standards deal in probabilities. Cooking food to a higher standard (longer or at a higher temperature) will make the food less likely to be unsafe and targeting a lower standard will make it a bit more likely. But there are no guarantees and no absolutes.

To compensate for this inherent uncertainty, food safety officials often base their policies on the so-called worse case scenario. They reason that if you assume the absolute worst contamination levels and act to address that threat, then the public will always be safe.

The irony is that, although experts debate these matters, their rigorous analyses can be undermined by confounding factors such as cross-contamination.

Consider the overstated risk of exposure to Trichinella, which as led to ridiculously excessive recommendations for cooking pork.

In decades past, pork was intrinsically less save than other meats because of muscle infiltration by Trichinella and surface contamination from fecal-borne pathogens like Salmonella and Clostritium perfringens.

Eventually the FDA relaxed the cooking requirements for pork;they are now no different than those for other meats. The irony is that few people noticed.

After decades of consuming overcooked pork by necessity, the American public has little appetite for rare pork; it isn’t considered traditional.

Should you want to invest in a copy of Modernist Cuisine, Amazon offers a discounted “pre-publication” rate of $461.62, reduced from the publisher’s price of $625.