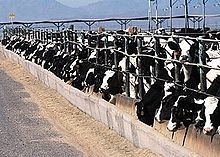 Dutch dairy farmer, Willy van Bakel, lived the American dream by buying and growing a successful 3,000-cow dairy farm in Michigan. Over the last 13 years he has helped 70 Dutch dairy farmers to immigrate to Ohio to set up their own farms. Was van Bakel helping his countrymen live the same dream or was he simply fleecing them out of millions of dollars?

The details are grim as shown in this Wall Street Journal article: Plenty of Spilled Milk to Cry Over for Dairymen Lured to U.S. About a dozen of the farmers he brought to the U.S. have filed for bankruptcy protection or are being foreclosed on by banks and 16 farms are shuttered because construction has been stalled for lack of funds.

These are not “dirt farmers” who were scratching out a living in the Netherlands; they were very successful and worth millions of dollars. They came here to find land that was cheaper in a country with fewer environmental regulations.

In the Netherlands, the average farm is 50 cows, milk quotas and minimum price supports are determined by the EU, 85% of all Dutch cattle are pastured not confined, manure is carefully regulated, and hormone use and genetically modified feed are forbidden.

The dairy industry in the U.S. is based on low milk prices, high costs for land and inputs, confined animal operations of 500 to 15,000 cows, few legal or environmental restrictions on manure management, no restraints on the use of genetically modified feed, and the use of prophylactic antibiotics and hormones as a normal business practice.

With such contradictory farming cultures and business practices, it is not surprising that more than 20 of these families have returned to the Netherlands bankrupt and in shame.

Changes in the Size and Location of U.S. Dairy Farms

Dutch farmers are moving to Indiana to escape problems at home