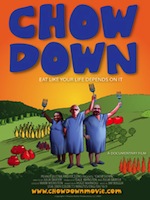 (Editor’s note: While we usually include books in this category, this video is an excellent look at what we eat and how it affects us.)

One man’s struggle to reverse his severe heart disease …. with diet.

Charles, 45, devoted husband and father of two, is shocked to learn not only that he has cardiovascular disease but that the blockages in his heart are so severe that his surgeon refuses to operate. But Charles is a fighter and he’ll do whatever it takes to be around to see his kids grow up.

Just like Charles, millions of Americans are sick and they’re tired of the pills and operations. What if you could avoid it all, but nobody’s willing to tell you how?

Dr. Caldwell Esselstyn of the Cleveland Clinic is trampling the status quo to get the word out. He’s the director of one of the longest-running studies in the peer-reviewed scientific literature showing that a plant-based diet can reverse even late stage heart disease. If heart disease, the number one killer in America, can be stopped and often reversed with diet, why aren’t people like Charles routinely given this information before being sent to the operating room?

Charles refuses to accept his doctor’s grim prognosis. With Dr. Esselstyn’s help, he resolves to not only treat his disease but to reverse it. We all know it’s easy to make resolutions, but sticking to them is the hard part. In Charles’ case, it could be the difference between life and death. Root for Charles as he tries not only to save his life but also to end the cycle of cardiovascular disease in his family.

Click on the book cover to get a copy of this book or watch the video online here. (1 hour, 13 minutes)