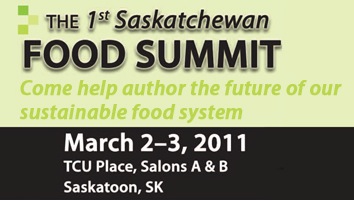 This past week I braved sub-zero weather and a snowstorm to attend the University of  Saskatchewan’s First Annual Food Summit on building local food systems as a keynote speaker. That kind of weather extending into March is part and parcel of prairie agriculture – lots of cereals, cattle and lentils on farms that are typically huge! You could fit fifty to a hundred or more of our periurban farms from around Seattle into one found on the northern prairies.

Pondering these average farm size differences and their implications made it seem all the more remarkable that the Agricultural Producers Association of Saskatchewan was one of the conference’s main sponsors. The association largely represents the big guys, yet it gets that it is in their interest to help create the space for local food systems to grow – which is remarkable considering it is typically small farms that make up local food economies. Doug Faller, the association’s policy manager, who spoke at the conference, also impressed me in his understanding of the economic and environmental limits of the industrial food economy.

So can local be big? Before I answer that question, it might be a good idea to revisit what we mean by local.  Some good food policy advocates (including me) are substituting the term “community-based” for “local” to signify that local food systems are based on relationships rooted in place.  This makes it harder for the Safeways of the world to appropriate what local is meant to represent for their marketing purposes. But using the term “community-based” also suggests an inverse logic – that local cannot be strictly defined by size, proximity, or ownership structure and that community-based businesses might include some that are big, national in scope, and corporations.

On balance, I would say that’s a good thing. Big companies are probably here to stay.  My hope is that they come to invest in the places they operate, not just their home bases, realizing that is in their interest to do so.  By helping to create thriving local economies, they stand to do better over time. We’ve had enough of beggaring communities for the benefit of a handful of businesses, only to see the economy collapse.

Thankfully, there are more than a few examples of big (relative to the community norm) food businesses who qualify as good practice enterprises. In Seattle, there is the Tom Douglas Restaurant Group.  Burgerville, Hopworks Urban Brewery and New Seasons Market in Oregon are others that come to mind.  Also, I would put many consumer food cooperatives in the category of bigger but community-based.  There are even some large companies with headquarters elsewhere who I would consider to be community-based.  For example, Bon Appetít, the food service company, does an outstanding job of sourcing locally – or did, before they were bought out – though they still do a pretty good job of it.

Which brings us to the dark side of big – it’s challenging to be big and treat your smaller suppliers and customers as equal partners. That’s because being big is usually about competing on price. In the industrial food economy, the trick to price is to standardize your relationships which rules out local. Being big invariably means being a corporation as well, (excepting big family farms), which legally requires businesses to prioritize making money over relationships.

Which leads me to conclude that big can be local – though it’s darn hard if the business is playing by industrial economy rules. But one thing that my visit to Saskatchewan and the new friends I made there taught me is that big can certainly be allies to local.