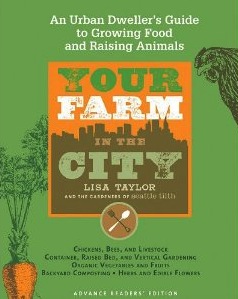 What is urban agriculture? It is agricultural production, processing, and distribution within cities and towns, for personal consumption and/or income generation. Urban agriculture includes small and large scale activities such as horticulture, livestock and milk production, and aquaculture.

Small-scale alternative food production such as gardens and urban farms are making it possible for families and small farming groups to grow their own food and to sell to local markets. Urban farmers around the world have taken control of food production and distribution to populations that cannot or choose not to buy their food through the conventional system.

Seattle Tilth has been very active teaching gardeners and urban farmers how to raise food in small spaces in the city. Lisa Taylor, Seattle Tilth Education Programs Manager, with the assistance of the gardeners at Seattle Tilth, has written a new book, Your Farm in the City: An Urban Dweller’s Guide to Growing Food and Raising Animals, for people who live in the city and want to grow some of their own food in spaces as small as a window box or as large as a city lot.

GoodFood World had the opportunity to speak to Lisa and hear her perspective on topics ranging from the definition of a “city farm” to the question: “Can we feed ourselves and others by our own labor in the city?”

GoodFood World: Let’s start with some simple definitions; what is the difference between a city farm and a garden?

Lisa Taylor: Depending on who you talk to you might get different answers. When we talk about urban farming, in particular, it can range from large production, classic farming operations to small family home gardens dedicated to growing edibles.

In the beginning, we called what we were doing organic gardening and we knew what we meant. We were growing food, primarily. Unfortunately, it was also a term that could have meant ornamental gardening; growing something that you couldn’t eat.

Those of us involved in urban farming in the past might not have called ourselves “farmers.” Farming is hard work and there’s a certain scale involved.  For folks who are new to growing food, the term helps to identify what they’re growing and communicate it to other people.

The terms “city farm” or “urban farm” identifies what kind of gardening you do. It also implies a scale – commercial, larger scale, production-level quantities – but if you really want to feed yourself from your yard, you need to think like a farmer.

We all have this promise – an image – of a “farm” from the time when we were kids; I think city farming or urban farming is the realization of that farm.

GoodFood World: Why farm in the city?

Lisa Taylor: Unlike the 70s and 80s when “return to the land” and self sufficiency was all about getting out of the city and getting property out in the country, folks are starting to see that they don’t have to move out of the city. There’s lots of land in the city that’s not productive so why not grow food closer to the people who are going to use it?

The new trend – this wave – is more about the potential for growing food all around you in any space and making urban land productive.

GoodFood World: Can we really support ourselves on a city lot or community garden space? Can we really get enough food from that amount of space?

Lisa Taylor: I’ve often laughed and said if we really had to live off what we grow, we’d be hungry – a lot! It really depends on your skills, on your site, the weather, how many people you’re feeding… Some folks are really into growing everything; some folks just want to eat from their yard all year round as a supplement to what they buy.

However, I have seen folks who cultivate every square inch of their property, and they are sustaining themselves by raising crops and animals on a city lot.

It really depends on what you’re willing and able to do. If you still want “lawn,” you’re not going to have space for crops. Or your yard may be too shady, too dry, or too wet.

The most important thing we can do for our own food security, is to grow some of our own food and learn how to cook it. A little bit adds to the big pot, even if you are supplementing your food purchases rather than feeding your family.

GoodFood World: Cities like New Orleans and Detroit suddenly have a huge amount of vacant space in the city – one as a result of natural disaster, the other an economic disaster. Is the urban homesteading movement an opportunity for people to farm in the city on a larger scale?

Lisa Taylor: I think those two cities are doing a lot with urban farming, primarily because the land is no longer valued for development. Both New Orleans and Detroit are seeing more community gardens and farms. By necessity, those two cities will have amazing urban farm projects emerge.

In Paris until the turn of the 20th century there were market farmers who fed the city on intensively cropped small farms inside the city limits.

Once the automobile started replacing the horse – whose manure had been fertilizing these farms – the property became valuable for development and the farms were pushed out.

Land in cities in the US has pretty much always been valued for development and the farmers worked the land outside the cities.

GoodFood World: Different parts of the country have different climates. In your new book, do you address how someone in Pasadena has to farm or garden differently from someone in Maine, for example?

Lisa Taylor: We are writing for those who are just starting out, so the techniques we describe are foundational; they don’t change from place to place. I tried to find the commonalities between different parts of the country. The techniques I describe don’t change wherever you go, most parts of the country are more similar than you would think. The planting calendar was the trickiest part. It had to be pretty broad, but people still need to check with their local resources.

When we talk about “Why urban farming?” one of the things that keeps surfacing is this: whenever we grow and share food, we create community. Unfortunately we are so separate from our neighbors today; growing food creates a connection with those around us.

The second most important thing is eating what you grow! You can grow all kinds of things but if you don’t eat them you are missing a big part of the process. In the book, we talk about extending your gardening season by preserving your harvest. One of my favorite chapters is about storing and preserving food.

We can thank the current good food advocates who have a voice – Michael Pollan, Alice Waters, Will Allen, Jamie Oliver, and others – they’re really helping get the word out to a population that’s new to these ideas.

For more information about Seattle Tilth, visit their website.

Learn more about Your Farm in the City: An Urban Dweller’s Guide to Growing Food and Raising Animals here.