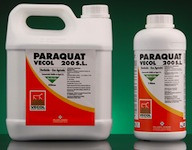 “Rotenone directly inhibits the function of the mitochondria, the structure responsible for making energy in the cell,” said Freya Kamel, Ph.D., a researcher in the intramural program at NIEHS and co-author of the paper appearing online in the journal Environmental Health Perspectives. “Paraquat increases production of certain oxygen derivatives that may harm cellular structures. People who used these pesticides or others with a similar mechanism of action were more likely to develop Parkinson’s disease.”

The authors studied 110 people with Parkinson’s disease and 358 matched controls from the Farming and Movement Evaluation (FAME) Study to investigate the relationship between Parkinson’s disease and exposure to pesticides or other agents that are toxic to nervous tissue. FAME is a case-control study that is part of the larger Agricultural Health Study, a study of farming and health in approximately 90,000 licensed pesticide applicators and their spouses. The investigators diagnosed Parkinson’s disease by agreement of movement disorder specialists and assessed the lifelong use of pesticides using detailed interviews.