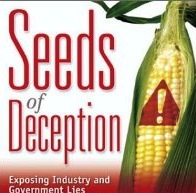 What the biotech industry doesn’t want you to know

Read the actual internal memos by FDA scientists, warning of toxins, allergies, and new diseases-all ignored by their superiors, including a former attorney for Monsanto. Discover how industry studies are designed to avoid finding problems. Learn why the FDA withheld information from Congress after a genetically modified supplement killed nearly a hundred people and disabled thousands.

Eating such experimental food is gambling with your health. Find out how you can protect yourself and your family.

Jeffrey Smith is a master storyteller. His style captivates and charms, while his meticulously documented facts leave no doubt about a massive injustice.