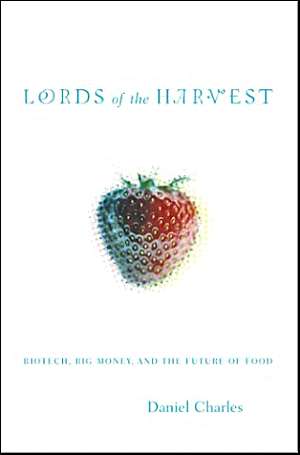 Lords Of The Harvest: Biotech, Big Money, And The Future Of Food, Daniel Charles (Basic Books, 2002)

If you want to explore  the story behind the controversy over “Frankenstein Foods” – genetically engineered crops like corn and soybeans – this is the book for you.

It’s a story, rather than an argument on behalf of one side or the other.  That story begins in the scientific breakthroughs of the early 1980s  and the decision by one midwestern chemical company, Monsanto, to dive headfirst into biotechnology.

Lords of the Harvest chronicles the cutthroat scientific competition and backroom business deals  that led to the first generation of genetically engineered crops:  Flavr Savr tomatoes, Roundup Ready soybeans, and insect-killing cotton and corn.  It explains Monsanto’s fateful crusade to re-write the rules of the seed business and how it ended up in a feud with the world’s largest seed company, Pioneer Hi-Bred International.  It outlines the forces and the personalities that drove Monsanto toward decisions that transformed the company, in the eyes of many, into a villain with ruthless ambitions that spanned the globe.

The book explores the motivations and the personal backgrounds of people on all sides of this conflict, from scientists and executives at Monsanto to the company’s leading opponents.  (For the author’s own perspective and reasons for writing the book, read the Prologue.)

In its conclusion, Lords of the Harvest points the way beyond the current controversy toward a deeper understanding of agriculture and the environmental burden imposed on Earth by humanity’s need for food.