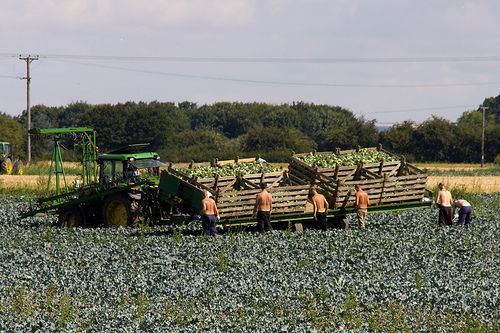 Strange that with all the talk about urban agriculture, city farming, and the move to “grow our own,” Americans don’t consider “farm worker” jobs as an alternative to unemployment.

The December 2010 “nonfarm” unemployment rates were 12.4% in California and 12% in Florida, two top agricultural states. States where there are plenty of farm worker jobs.

Even when the state of Washington increased the minimum wage for farm workers, Americans still didn’t apply for the jobs.

For generations, American farmers have depended on immigrant labor; workers – legal and illegal – mostly from Mexico and Central America. The Department of Labor estimates that as many as half of all farm workers are undocumented.

And those seasonal workers work under extremely difficult and often unsafe conditions, moving to follow the ripening fruits and vegetables, and making minimum wage for 60-hour work weeks.

So what’s a farmer to do? In some cases, huge farming operations have simply picked up and moved south of the border, without changing labor practices. As a result, instead of paying $8 to $10 an hour wages, these operations pay $12 to $15 a day. The workers are doing just as much back breaking work, under the same – or worse – working conditions, for far lower wages.

On the other hand, occasionally a small farmer takes the challenge to try to make a difference and change the system.

Barry Mitling, profiled by PRI’s The World, moved to Mexico to open a goat dairy after he realized that one of his own farm workers was spending months – sometimes years – away from home and his family.

Mitling his not hiring workers, he is training co-owners. It is his goal to help his employees own their own farms.

Until, however, Mexican farm workers – who make 15% – 20% of the wages they would make in the US – have the opportunity to get an education for themselves and their children, have good health care, and own their own farms, they will continue to come to the US and work in the fields.

All because as consumers we demand cheap food.

Read more about farm workers, in the US and in Mexico, here: