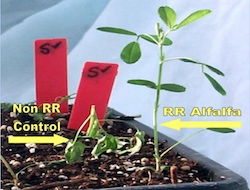 Last August, feral GM canola was discovered growing “like a weed” and transferring engineered genes to wild versions of the same plant even though the USDA mandates buffer zones around the transgenic crops.

Scientists from the University of Arkansas announced the results of a study that showed genetically engineered pesticide-resistant canola growing uncontrolled in North Dakota. Up to 80 percent of wild canola in their sample from various North Dakota roadsides contained engineered genes.

Alfalfa also has a high potential to become feral according to the article, The Biology and Ecology of Feral Alfalfa (Medicago sativa L.) and Its Implications for Novel Trait Confinement in North America (Critical Reviews in Plant Sciences, Volume 28, Issue 1 & 2 January 2009 , pages 69 – 87).

Alfalfa is the first perennial, insect-pollinated crop to be genetically engineered and approved for unconfined release into the environment. This review investigates and compiles information in the literature that reveals the life history components that can influence ferality in alfalfa. Characteristics that can contribute to ferality in alfalfa include high genetic diversity, perenniality, quick regrowth potential, persistence, symbiotic nitrogen fixation, deep tap root system, drought and cold tolerance, and seed dormancy. With these traits, alfalfa is equipped to invade and dominate unmanaged habitats.

Regardless, the USDA is offering two options – see the announcement below – for management and use of transgenic alfalfa as a result of the environmental impact statement:

The final EIS will appear in the Federal Register on December 23 for 30 days of public review.

On December 16, the U.S. Department of Agriculture announced the availability of the final environmental impact statement (EIS) that evaluates the potential environmental effects of deregulating alfalfa genetically engineered (GE) to be resistant to the herbicide glyphosate, which is known commercially as Roundup. This GE alfalfa is commonly referred to as Roundup Ready (RR) alfalfa.

“Our goal with the EIS, first and foremost, is to recognize and consider the many concerns that we have heard from all segments of agriculture,” said Secretary Vilsack. “We are equally committed to finding solutions that support not only the developers and users of biotechnology products, but growers who rely on purity in the non-genetically engineered seed supply.”

USDA considered three alternatives during the preparation of the final EIS: 1) to maintain the RR alfalfa’s status as a regulated article; 2) to deregulate RR alfalfa; or 3) to deregulate RR alfalfa with geographic restrictions and isolation distances for the production of RR alfalfa. USDA has thoroughly analyzed the potential environmental impacts of the proposed alternatives and has listed two preferred options: deregulation as one option and the other deregulation accompanied by a combination of isolation distances and geographic restrictions on the production of GE alfalfa seed and, in some locations, hay.

USDA maintains that biotechnology holds great promise for agriculture here in the United States, and around the world. There’s absolutely no doubt of the safety of the many products USDA’s regulatory system has approved. The examination of these issues through the EIS process, however, highlighted some of the challenges USDA faces in the area of biotechnology regulation as it aims to meet the expectations of its diverse stakeholders.

“We have seen rapid adoption of biotechnology in agriculture, along with the rise of organic and non-genetically engineered sectors over the last several decades,” Vilsack said. “While the growth in all these areas is great for agriculture, it has also led, at times, to conflict or, at best, an uneasy coexistence between the different ways of growing crops. We need to address these challenges and develop a sensible path forward for strengthening coexistence of all segments of agriculture in our country. All are vital and a part of rural America’s success. All should be able to thrive together.”

Vilsack said that USDA will use this opportunity to begin a conversation on how to move forward and find strategies for strengthening coexistence. “We will partner with all those who want to roll up their sleeves and work with us and each other to find common sense solutions to today’s challenges. And we will do so openly and transparently.”

It is important to note that the EIS USDA is releasing today is not a decision document. It is an analysis of the impacts of the various alternatives with regard to their potential environmental and related economic impacts. The final EIS will be available for public review for at least 30 days before USDA will publish a record of decision on how it will proceed.