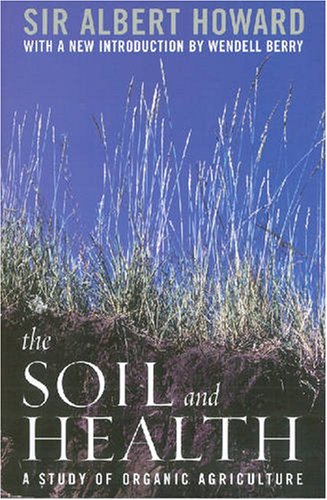 The Soil and Health: A Study of Organic Agriculture, Sir Albert Howard (The University Press of Kentucky, 2007)

The Soil and Health was published in 1945, just before agricultural corporations surged to global proportions. Sir Albert Howard’s work is a major inspiration to the growing organic and sustainable farming movement and a thought-provoking reminder of a road not taken in developing mainstream agriculture during the past half-century.The central tenet of Howard’s philosophy is that healthy soil, vegetation, animals, and humans are connected and that undernourishment of soil is the source of modern agricultural and health problems. In Howard’s estimation, heavy reliance on chemical fertilizers will ultimately lead to widespread disease and destruction of vibrant communities. As the environmental and social consequences of industrial farming are being hotly debated, The Soil and Health remains vital to understanding what is at stake in the battle between chemical and organic farming.