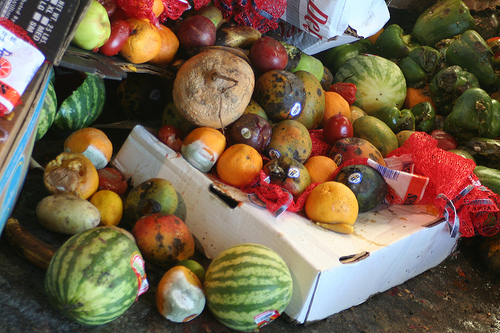 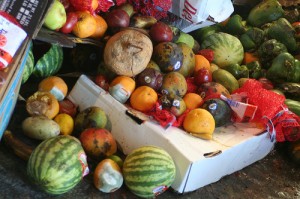 We live in a surplus food economy, yet there are millions who can’t afford to buy nutritious food for their families.

While one quarter to one third of all food produced is “wasted” between distribution, retailing, and consumption, supermarket “shrinkage” or loss calculated for non-saleable perishable products is 8-10%. When you consider produce alone, the total is much higher.

Supermarkets and superstores are cooperating to get some of that surplus food into the hands of the people who need it. As “Zero Waste” programs are developed, markets are sending more non-saleable food to food kitchens, not landfills.

For example, two Santa Barbara Albertons stores (part of the SuperValu chain) have reached “zero waste” in their operations. By combining a food donation program with recycling and a joint composting program with the City of Santa Barbara, the stores have diverted 95% of waste products from landfills and incinerators.

Walmart has stepped into the arena with a five-year, $2 billion program to “help end hunger in the US” launched last May. Through the program Walmart will:

While more than a billion pounds of food will be donated to food banks and food kitchens, much of it is likely to be unsold merchandise, i.e., surplus inventory that would have been written off as a loss and probably destined for landfills and incinerators.

Unfortunately while Walmart is expressing its concern and commitment to feed the hungry, it is contributing to the population of working poor. The average Walmart “associate” makes $11.75 an hour, slightly below the national average for retail employees of $12.04 per hour; totaling about $20,700 a year in wages.

In a one-earner household, $22,000 is the poverty line, and in 2008, 65% of working families that received SNAP were single-parent families. One must assume that a large number of the 1.4 million people working for Walmart In the US (1% of the 140 million working population) are represented.

So on one hand, Walmart is donating surplus unsold merchandise to “help end hunger” while paying many of its employees wages that fall below the poverty line. In Ohio alone, for example, more than 15,000 of its workers are on Medicaid, and more than 12,000 are receiving food stamps.

Read more about waste in the food system: