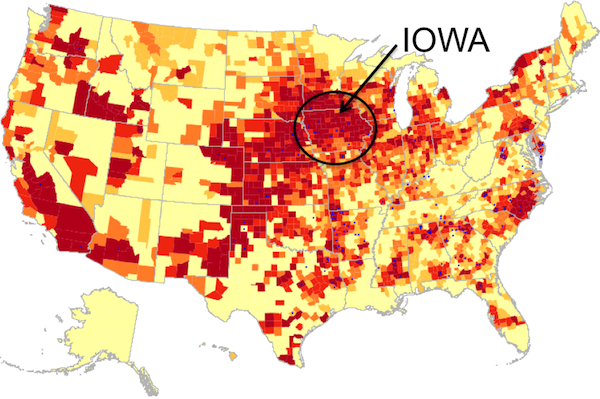 Terry Branstad, Governor-elect of Iowa, is considering deregulating factory farms. Branstad has called for producers to double their production by 2050, and pledged to help by streamlining permitting and regulations that impact the sector.

That’s a big deal since Iowa has more factory farms than any other state in America.

According to an article appearing in the Iowa Independent:

In 1995, while Branstad was serving his fourth term as governor, he signed a bill into law that stripped all zoning authority related to animal confinements from the state’s county supervisors. Passage of the measure has been one of the key reasons that the presence of CAFOs has expanded so rapidly across the state – local interests simply have no legal grounds on which to stop such businesses from locating. [T]he lack of local control has also been a contributing factor to overall pork and other livestock concentrations in Iowa.

If Concentrated Animal Feeding Operations (CAFOs) weren’t bad enough for the environment, there’s a new report out that indicates factory farms are not only making us sick but the bacteria they spread are resistant to antibiotics. More here.