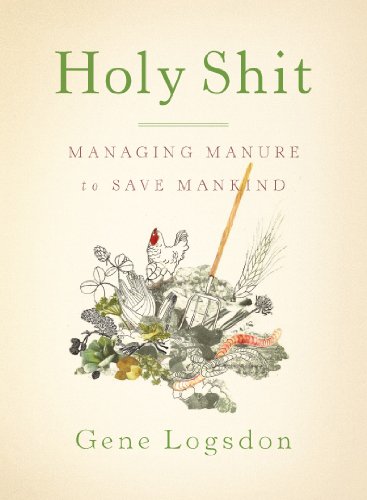 The Atlantic – that venerable Boston publication dating from 1857 – covers politics, business, culture, technology and food, as well as national and international politics. When the Atlantic talks dirty, you know that the “thought leaders” it targets, are listening.

Gene Logsdon, author of Holy Shit: Managing Manure To Save Mankind, half-jokingly suggested not long ago that “animal manure was going to be the hottest commodity on the Chicago Board of Trade one of these days.” It turns out that he might have been prescient! His recent article in the Atlantic, Logsdon reminds us that the waste so many farmers have struggled to dispose of, may actually be worth a lot of money. The idea that all of agriculture might have to rely on animal (and human) waste to maintain the necessary soil fertility to keep the world from starving is not at all new. Only in the last hundred years or so has it been possible to lard enough anhydrous ammonia, superphosphate, and muriate of potash on crops to attain record-breaking yields (while burning and beating organic matter out of the soil). Before this “progress,” human society had no choice but to consider manure – animal and human – to be more precious than gold.

Think of the excrement of 50 million people and 2.5 billion chickens helping to enrich soil rather than pollute water. Think of the food being produced without dependence on manufactured fertilizers or the need even for much fossil fuel.

Think of all those people interacting with one another in their communities instead of running all over the world learning about nothing particular in any kind of deep, thoughtful way.

Think of all those people feeling happy and important because they are involved in the meaningful work of feeding themselves and others, not overwhelmed by a paranoid fear that they are helpless before the dragons of a self-destructing economy.

Think of something approaching an earthly paradise. If it gives you joy and contentment, who gives a shit what it’s worth in money?