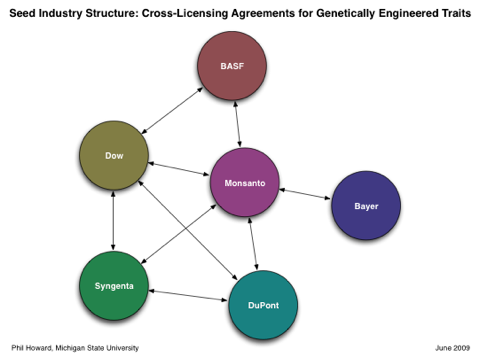 USDA Secretary Tom Vilsack has called for “a new paradigm of coexistence and cooperation” for both genetically engineered and non-GE agricultural approaches. In other words, a truce with companies like Monsanto, Syngenta, DuPont, BASF, Bayer Crop Science, and others, are the USDA’s way of dealing with the issues of genetically engineered plant and animals.

Helena Bottemiller, Food Safety News, clarifies his point of view in Vilsack Calls for a Truce in GE Crops Fight.

However, we need to take into consideration that a truce implies an agreement between equals. One only needs to see that the world’s top seven seed companies – all of whom are heavily involved in genetically engineering those seeds – hold about 2/3 of the global “proprietary seed” market.

Phil Howard, Assistant Professor, Michigan State University, has put together an infographic that spells it out clearly. Monsanto, which has about a quarter of the global proprietary seed market is the center of the web.

Can we really say this an agreement between equals?