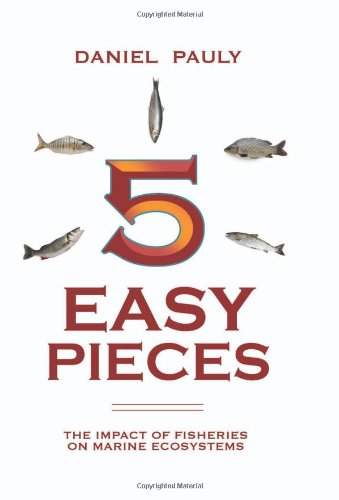 5 Easy Pieces features five contributions, originally published in Nature and Science, demonstrating the massive impacts of modern industrial fisheries on marine ecosystems. Initially published over an eight-year period, from 1995 to 2003, these articles illustrate a transition in scientific thought, from the initially-contested realization that the crisis of fisheries and their underlying ocean ecosystems was, in fact, global to its broad acceptance by mainstream scientific and public opinion.

Daniel Pauly, a well-known fisheries expert who was a co-author of all five articles, presents each original article here and surrounds it with a rich array of contemporary comments, many of which led Pauly and his colleagues to further study. In addition, Pauly documents how popular media reported on the articles and their findings. By doing so, he demonstrates how science evolves.

In one chapter, for example, the popular media pick up a contribution and use Pauly’s conclusions to contextualize current political disputes; in another, what might be seen as nitpicking by fellow scientists leads Pauly and his colleagues to strengthen their case that commercial fishing is endangering the global marine ecosystem. This structure also allows readers to see how scientists’ interactions with the popular media can shape the reception of their own, sometimes controversial, scientific studies.

In an epilogue, Pauly reflects on the ways that scientific consensus emerges from discussions both within and outside the scientific community.