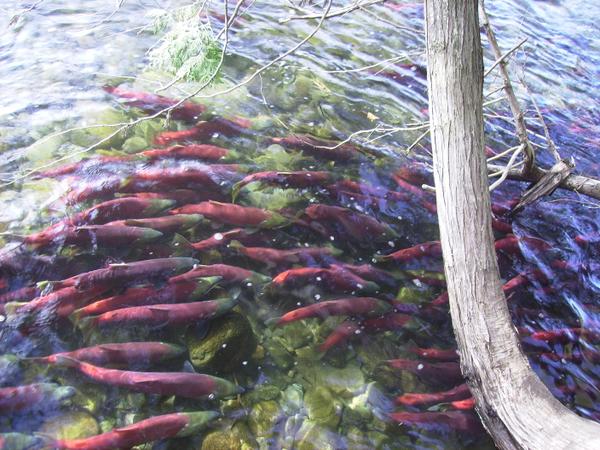 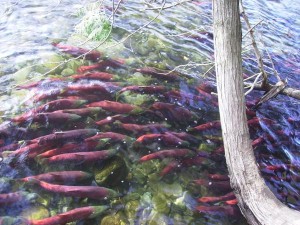 We live in the Pacific Northwest, for Pete’s sake! So why is the “State Fish” the steelhead trout? Why isn’t it the salmon?

Just north of Seattle, Vancouver BC sits at the mouth of the Fraser River where as many as 35 million (that’s million!) sockeye salmon are swimming inland to lay their eggs.

Although a very small number travel nearly 1000 miles to their final spawning beds, from 6 to 12 million of them will stop 250 miles inland in the Adams River just east of Kamloops, British Columbia.

The best thing – no one knew they were coming! Last year only about 1 million fish returned. The run was so low the Canadian government set up an inquiry to find out what happened.

Fisherman are still arguing that they should have been able to “harvest” more, even though the fresh fish market was flooded, prices bottomed out, and processing plants that freeze fish to sell off season were unable to keep up with the volume.

Runs like this need the fish to make it back “home” in order to spawn and start the next generation that will head out to sea, disappear into the unknown and, we hope, come back in four years to repeat this adventure.

Here are just a few of the news pieces from around the world about this amazing event: