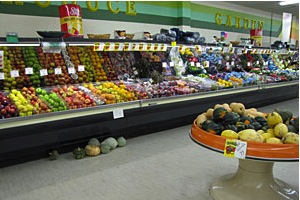 Walk into the brick building that is Lou’s Eagle Grocery on the corner of Fourth and E streets in Eagle, Nebraska, and you’ll see a full service grocery store crammed into less than 2,000 square feet.

There’s fresh produce and meat, a selection of wine, premium beers and coffees as well as DVD rentals and a surprisingly large selection for a store with just three narrow aisles.

The store was hopping just after Saturday’s game, when more than a dozen people dropped in to buy a few essentials, cigarettes or ingredients for dinner.

Lou’s has a small-town, community feel, the kind of place where the cashier knows most by name. 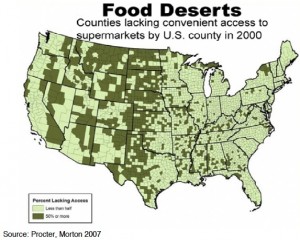 And while the perception is that shopping at a smaller store means higher prices, many local stores actually charge lower prices for basic food products. Read about Lou’s Eagle Grocery in the Lincoln Journal Star.

Unfortunately, rural grocery stores are slowly disappearing across the nation.

The Center for Rural Affairs has published a new report documenting the loss of rural groceries and food deserts – Rural Grocery Stores: Importance and Challenges.

In rural Iowa, 43% of grocery stores in towns with populations less than 1,000 have closed. (Procter)

Get a copy of the report here.