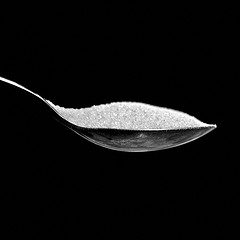 Between 1998 and 2004, tobacco companies appeared to have adjusted the amount of nicotine up in cigarette brands popular with young people and minorities. As a result, legislation and regulations tightened up.

Results showed that the total sugar content of the beverages ranged from 85 to 128% of that listed on the label. The average fructose content in the HFCS used was 59% (range 47-65%) and several major brands appear to be produced with HFCS that is 65% fructose.

What’s the problem? Tom Laskawy, Grist, puts it this way:

It’s because research has shown fructose to be particularly harmful to human health. Unlike excess glucose, which passes through our digestive tract and is excreted, 100%  of fructose that’s consumed is taken up by the liver. Once there, fructose causes increased fat deposition in the abdominal cavity and increased blood levels of triglycerides — both of which are risk factors for heart disease and diabetes. So, over a lifetime, the HFCS in the 53 gallons of soda per year the average American drinks thus increases their fructose consumption compared to table sugar, and probably adds up to big health problems.