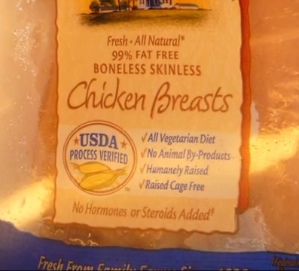 Somehow the words “Humane Society” always seem to bring images of puppies and kittens to my mind. But the Humane Society of the United States (HSUS) will NOT stop at dogs and cats; ALL animals are to be protected, including the turkeys and chickens that are part of our everyday diets.

Like the comic book hero Hellboy – who was tough on evil doers but had a soft heart for cats – HSUS is out to stamp out the bad guys.

Today the HSUS is challenging Perdue Farms‘ claims that the chickens in packages sold under the “Perdue” or “Harvestland” labels are “humanely raised.” Truth-in-advertising laws can be used in a wide variety of ways!

Clearly those are not practices that could be considered humane. Read the rest of the announcement here.

Last week, the day before Thanksgiving, HSUS released the findings from its latest undercover investigation of a turkey hatchery in Willmar Minnesota. An undercover HSUS investigator worked – and filmed – in a Willmar Poultry Company hatchery for 11 days in October. According to the company, 50% of the whole turkeys available in typical U.S. grocery stores were hatched at the company. The company hatches 30 million poults (young turkeys) annually and delivers 600,000 baby turkeys to customers every week.

The investigator documented multiple abuses including:

“Our latest investigation exposes a callous disregard for animal welfare in the turkey industry, including practices such as grinding alive sick, injured, and even healthy but unwanted turkeys,” stated Wayne Pacelle, president and CEO of The HSUS. “It’s unacceptable for workers to leave injured and non-ambulatory animals to suffer on the floor for hours on end, only to then send them to their deaths in a grinder.”

Read the rest of the announcement here and watch a video taken inside the Willmar plant. Be aware that the video is not for the squeamish.