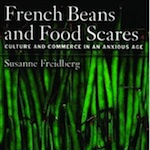 From mad cows to McDonaldization to genetically modified maize, European food scares and controversies at the turn of the millennium provoked anxieties about the perils hidden in an increasingly industrialized, internationalized food supply.

These food fears have cast a shadow as long as Africa, where farmers struggle to meet European demand for the certifiably clean green bean. But the trade in fresh foods between Africa and Europe is hardly uniform. Britain and France still do business mostly with their former colonies, in ways that differ as dramatically as their national cuisines.

The British buy their “baby veg” from industrial-scale farms, pre-packaged and pre-trimmed; the French, meanwhile, prefer their green beans naked, and produced by peasants. Managers and technologists coordinate the baby veg trade between Anglophone Africa and Britain, whereas an assortment of commercants and self-styled agro-entrepreneurs run the French bean trade. Globalization, then, has not erased cultural difference in the world of food and trade, but instead has stretched it to a transnational scale.

French Beans and Food Scares explores the cultural economies of two “non-traditional” commodity trades between Africa and Europe–one anglophone, the other francophone–in order to show not only why they differ but also how both have felt the fall-out of the wealthy world’s food scares.

In a voyage that begins in the mid-19th century and ends in the early 21st, passing by way of Paris, London, Burkina Faso and Zambia, French Beans and Food Scares illuminates the daily work of exporters, importers and other invisible intermediaries in the global fresh food economy. These intermediaries’ accounts provide a unique perspective on the practical and ethical challenges of globalized food trading in an anxious age. They also show how postcolonial ties shape not only different societies’ geographies of food supply, but also their very ideas about what makes food good. (Amazon product description)