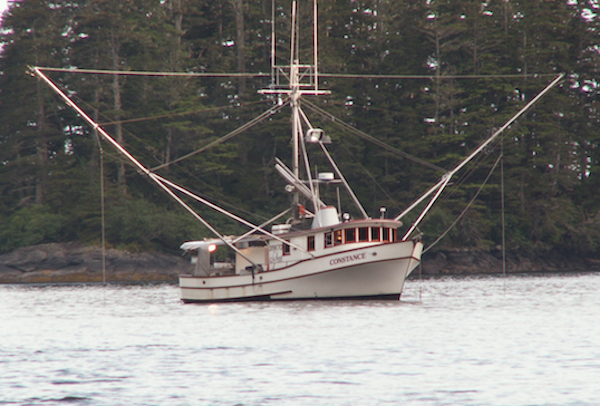 Alive with shimmering color, a king salmon or lingcod is a beautiful fish as it comes out of the water. Keeping that freshness from the boat to the table is a skill that fishermen like Krist Martinsen and his sons, Olin and Karl, have learned.

Their boat, the Fishing Vessel Constance (named after Krist’s grandmother), is based in Sitka Alaska. For almost 35 years, Krist has been a troll fisherman. He fishes with a hook and line, using natural and artificial baits, and brings in each fish by hand. From May until September, from 4:00 AM to 11:00 PM, Krist and his sons are on deck.

The V/F Constance is part of a fleet of 17 independently owned boats that practices a handling process called Frozen at Sea. Lest you turn your nose up at fish that has been frozen, let’s compare the traditional handling process to Martinsen’s process.

Whether fish are troll-caught or netted, they are handled in quantity rather than one at a time. When the fish are caught, they are bled and gutted and stacked on deck, often for several hours. Once a sufficient quantity of fish has been collected, they are taken below deck into the hold where they are packed in ice and stored at 32 degrees for up to 5 days before the boat returns to dock.

On the Constance, each fish is handled individually. The first steps are the same: the head is cut off and the gills are cut to bleed the fish. Next they are split along the belly and eviscerated.

At this point the process changes. To prevent dark-colored meat along the backbone, all the remaining blood is flushed out of the fish using a small catheter and water pressure.

Each fish carefully laid out on a tray; the belly is opened, the fins are lifted from the sides, and the tail is fanned out and laid flat. Rather than lying on the deck waiting to be chilled, the fish is immediately put in a “blast freezer” on deck and frozen to minus 40 degrees.

When it’s frozen through, the fish is hand-dipped several times in clean water to give it a protective glaze to prevent dehydration.

Because all of this takes place “pre-rigor” or before rigor mortis sets in, the fish is fresher and firmer, and maintains the color of a “just caught” fish. It’s just minutes from hook to freezer.

The end result is a fish that is has been treated respectfully and is presented like a piece of art.

Traceability – Know Where It’s From

Because each fish is handled individually and not simply dumped into crates along with the catch from other boats, it is possible to track it at every point of handling. The boxes of frozen fish are labeled with the boat’s name, the captain’s name, the home port, the date of catch, and the species of fish.

When the shipment reaches the processor, each fish is placed in its own full-length plastic bag labeled with a source code. The bag protects the fish from damage in storage and the code provides all the identity information needed to know when, where, and by whom the fish was caught.

Since Alaska became a state, the fishing industry has been carefully managed for sustainability. In fact, sustainability is written into the state’s constitution:

Fish, forests, wildlife, grasslands, and all other replenishable resources belonging to the State shall be utilized, developed, and maintained on the sustained yield principal.

Clearly these sustainability measure work! In 1959, statewide salmon harvests were about 25 million salmon a year. The 2010 commercial salmon harvest for Alaska, more than fifty years later, was 168 million fish, with an estimated value of $534 million. That is based on the price paid at the first point of sale.