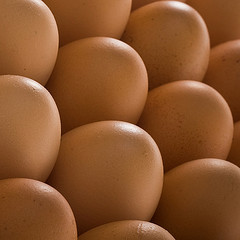 In August more than a half a billion eggs (550 million) contaminated with salmonella and sold by two Iowa egg producers were been recalled from markets in 17 states. Estimates of the number of people who became ill exceed 1500.

This week, after investigation and inspection, the FDA has notified Hillandale Farms that they may begin shipping eggs from three of seven hen houses. The operators are required to clean and disinfect houses 1 and 2 and withhold eggs from shipment from houses 4, 6, 8 and 9 for additional testing. Eggs from houses 3, 5, and 7 have consistently tested free of Salmonella.

Failure to take prompt corrective action may result in regulatory action being initiated by the Food and Drug Administration without further notice. These actions include, but are not limited to, seizure and/or injunction.

Note the word “may…” There is nothing here that says “you broke the law and we’re going to close you down.” Just that there may be action that might result in seizure.