Imagine 80,000 laying hens in a single building, crowded in confinement conditions, on “farms” with hundreds of thousands or a million birds.  Is that organic? How about a tiny enclosed concrete porch, accessible by only 3%-5% of the tens of thousands of birds inside a henhouse. Does that pass as outdoor access as required by federal organic law? 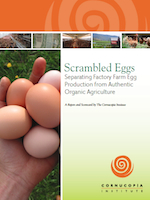 The recall in August of more than half a billion eggs tainted with salmonella threw a sudden spotlight on the egg supply chain. The resulting investigation of the causes pointed to the food supply and the condition of the barns and surrounding grounds where the laying hens were housed as potential sources of infection.

The resulting media attention caused consumers to begin to question the industrialized system in which their food is produced; more and more the are asking for the story behind their food. In response to concerns for safer food, those same consumers began to seek out eggs labeled “organic” under the assumption that hens producing organic eggs are raised in healthier manner.

As an alternative to industrialized food, consumers assume that organic farming means respecting the principles on which the organic farming movement was founded, such as building soil fertility, maintaining ecological balance, promoting biodiversity, reducing dependence on off-farm inputs, recycling nutrients, and allowing livestock to display their natural instinctive behaviors.

Cornucopia reports that according to the United Egg Producers (UEP), the industry lobby group, 80 percent of all organic eggs are produced by just a handful of its largest members.  Most of these operations own hundreds of thousands, or even millions of birds, and have diversified into “specialty eggs,” which include organic. At least one UEP member, Hillandale Farms, was implicated in the salmonella outbreak which affected conventional eggs.

Scrambled Eggs focuses not on the size of some of these mammoth agribusinesses but rather on their organic livestock management practices. It says that most of these giant henhouses, some holding 85,000 birds or more, provide no legitimate access to the outdoors, as required in the federal organic regulations.

The new report comes at a critical juncture for the organic poultry industry. The National Organic Standards Board (NOSB), the expert citizen advisory panel set up by Congress to advise the USDA on organic policy, has been debating a set of proposed new regulations for poultry and other livestock that would establish housing-density standards and a clearer understanding of what the requirement for outdoor access truly means. The industry’s largest operators, along with their lobbyists, have been loudly voicing their opposition to requirements for outdoor space.

Read the entire report and the accompanying scorecard here.