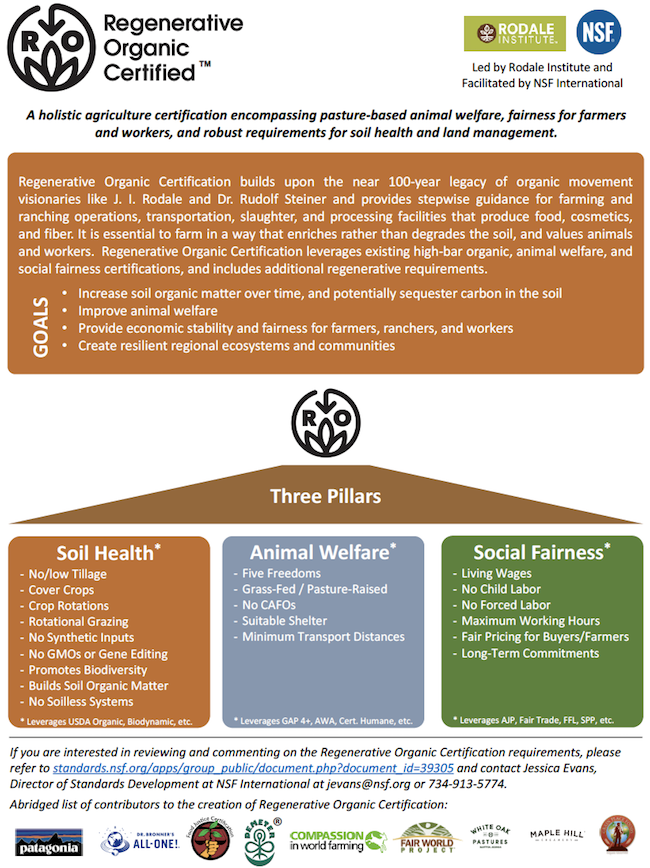 The nearly 100-year organic legacy that was built on work done by Sir Albert Howard, J. I. Rodale,  and Dr. Rudolf Steiner, resulted in the organic production systems now in place. The current National Organic Standards were finalized in 2000 (yes, they were finally put into place that recently), and because of the way they were written, large organic production – Big Org – joined Big Ag in implementing industrial agricultural methods. And from then on, small to medium-sized organic producers have been pushed to the background.

Regenerative Organic Certification builds on that legacy and the USDA National Organic Program  guidelines as a baseline.

And as agricultural practices continue to evolve, new approaches to land management, including cropping and range management, need to be focused on enriching and improving the soil, and valuing the animals and farm workers who are critical parts of the agricultural process.

Over the years a number of “Organic Plus” initiatives have been proposed and developed; Rodale has now proposed a new certification that build on – not replace – existing USDA organic standards. Regenerative Organic Certification adds criteria and additional standards in the areas of soil health and land management, animal welfare, and farmer and worker fairness.

The goal of Regenerative Organic Certification is to promote holistic agriculture practices in an all-encompassing certification that: