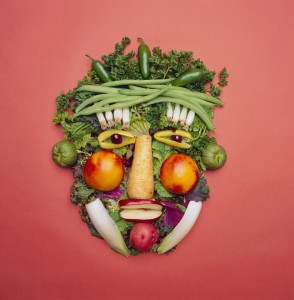 Do you have a happy brain? Mine has had its ups and downs, but just hearing that the American Psychiatric Association’s (APA) annual meeting last month included a workshop called “Prescription Brain Food” boosted my happiness. And in an apt play on words, speaker Drew Ramsey, MD, said, “It’s time to send your patients to the ‘Farm-acy.’”

Ramsey’s quip was in reference to relevant research. The first is a 2009 Spanish study published in Journal of the American Medical Association and titled “Association of the Mediterranean Dietary Pattern With the Incidence of Depression.” It puts data behind things we’ve heard for years; certain foods can lower the risk of depression. Vegetables, fruit and nuts, cereal, legumes and fish were all weighted positively in the study. The foods that didn’t get positive treatment were meat, meat products and whole-fat dairy.

Another study published the same year in the British Journal of Psychiatry and called “Dietary Pattern and Depressive Symptoms in Middle Age,” had similar findings. It compared a whole-food diet rich in fruits, vegetables and fish with a processed-food diet of processed meat, sugary food, refined grains and things which we put in a deep fryer. The conclusion? A diet high in processed foods is a risk factor for depression, while one that is heavy on whole foods is protective. Not even just “neutral” or “better;” no, it’s protective.

So, let’s talk diet modifications. Cutting stuff out is one thing. After a protracted battle with our willpower, we can usually make bad food go away. Usually. I think the challenge is adding things that are good for us if we don’t actually like them. Like fish that tastes like fish. There isn’t enough lemon or olive oil in the world to cover that up.

In case you have the same fishy problem as me, I’ve compiled a list of fish-that-taste-like-chicken (or are at least mild).

Another problem area for me is legumes, mainly because I can never remember what the heck they are. (If asked, I would default to beans and then fall silent.) From Wikipedia, “well-known legumes include alfalfa, clover, peas, beans, lentils, lupins, mesquite, carob, soybeans, peanuts and the woody climbing vine wisteria.” Come again? No wonder I can’t remember them – it’s a total shit-mix! And how did a freaking wisteria get in that category? (I’m certainly not going to eat wisteria. The tangle of vines would get caught in my throat.)

On an interesting end note, when I think back to all the discussions I’ve had about depression with a variety of Western medicine practitioners over the past two decades, I can’t remember a single one of them ever querying my food intake. It was with my acupuncturist that I began my “food journey.” I sure hope the APA has already booked Drew Ramsey to speak again at next year’s annual meeting. His message to medical professionals is the kind that needs to go viral.

Read this article as it originally appeared on Laura’s blog, Stories to Connect Cultures.