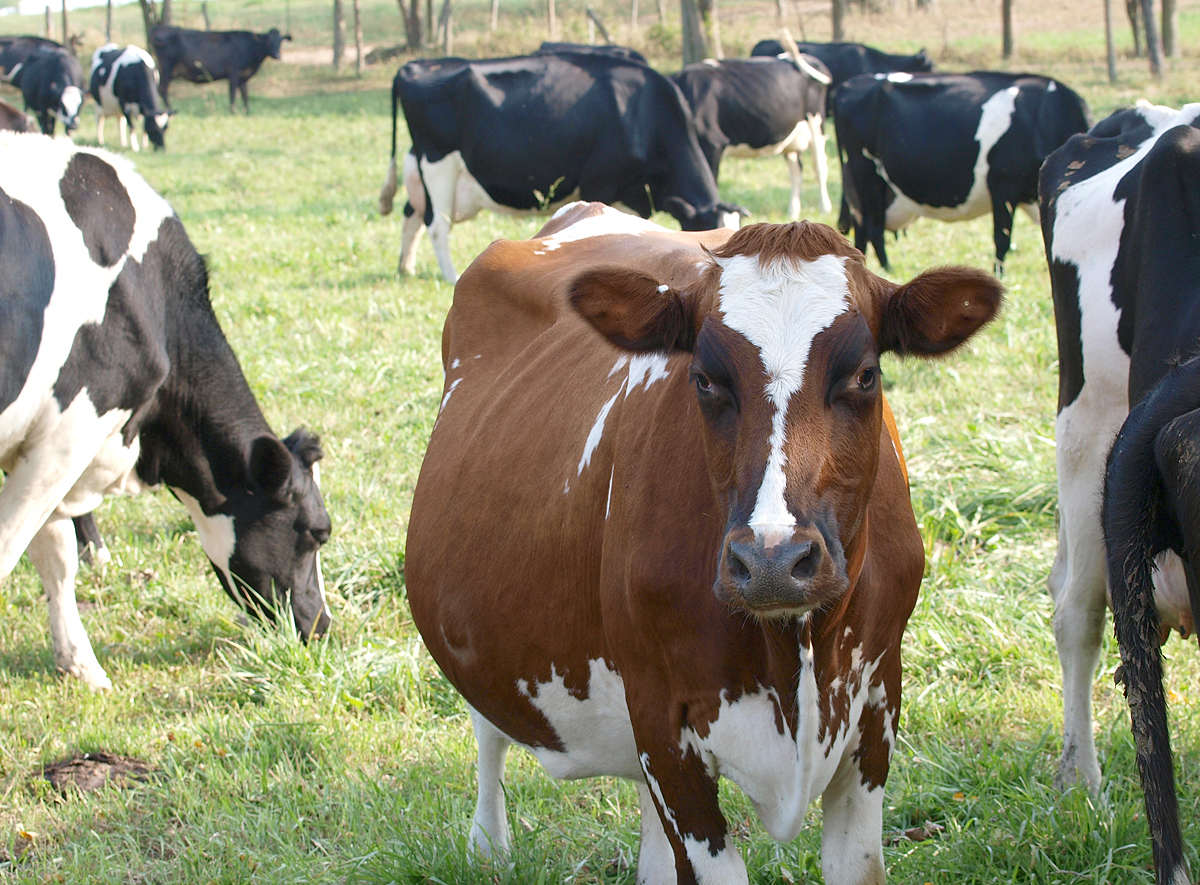 Quick! What is the first thing that comes to mind when you hear the words “dairy cows?” Probably black and white cows in a grassy field in front of a red barn, right? That’s the image that every confinement dairy operation would like you to imagine, but very few cows are raised that way.

Letting dairy cows graze in fields rather than feeding them in centralized facilities might seem old-fashioned, yet it can make good economic sense. A conventional dairy farmer delivers the feed to the cow; a grazer delivers the cow to the feed.

Rick Adamski, Full Circle Farm, Seymour Wisconsin, is a grazier. No, he doesn’t eat grass; he milks about 90 cows that do. Farming since 1984, when he “came back home” after graduate school, Adamski lives by a set of values very dear to him and his family. “We see the farm as a part of the environment. We strive to understand nature to farm better.  We do not see us controlling nature. We also strive to raise the value of people rather than raising the value of money,” says Rick.

Adamski learned to work hard from his parents; both are 88 and still active. In fact, his father is raising replacement heifers for the farm. The idea that elimination of hard physical labor is “progress,” in the face of so many unemployed, is foreign to them both.

The Value of a Small Marketing Co-op

The “value of people” is also expressed in co-operative relationships, and Rick and a small group of like-minded dairy farmers started their own cheese co-op in the late 1990s. Intending to learn how to make their own cheese – just to see if they could do it – each farm contributed the milk from one day’s production every week to fill a single truck load.

Experimentation and testing, learning how to handle, cut and wrap: it was all a learning process. In what could have been an expensive lesson – the discovery that cutting cheese into blocks created a lot of waste – inspiration came to the rescue and a world-champion cheese spread resulted. Made of natural, uncolored cheddar mixed with honey and cranberries, the spread was an “all-natural, all-Wisconsin” product.

And it was so tasty that Wisconsin Dairy Grazers Co-op was incorporated and launched Northern Meadows Cheese to keep making the cheese and the spread.

When putting together a small co-op though, logistics should be a top consideration. A marketing agent was hired, a trucking firm contracted, and once a week from the end of June until August, a truck made a day-long, 500-mile loop to collect all the milk and deliver it to a cheese factory in south central Wisconsin. That long trip was a logistical challenge!

Developing a small co-op is almost like creating a family out of unrelated people, at least the relationships can be as close, supportive, and conflicting as a family. “The co-op was great fun; there were really only one or two meetings in the beginning that were challenging,” Adamski noted. “There were some hurdles when we were trying to decide how to set it up. But in the end we succeeded.”

Why not go it alone? Why try to bring together a group to market milk or cheese, or any other products for that matter? What is it about a small marketing co-op that helps farmers sell their products? Wisconsin Dairy Grazers Co-op was formed to give its members an opportunity to experiment with value-added production with reduced risk by making more cost effective use of transportation, marketing, and processing.

Although the group was just beginning to develop a market for their cheese, they chose to dissolve the co-op. In the end, they would have gotten a better price if they had sold the milk to another processor. “As a group we weren’t dedicated to staying in and making it work, so we closed it down. Had we stuck with it, we probably would have seen someone buy out our cheese production and make it work,” said Adamski. “It was a good experience and we learned a lot.”

All the members learned much from the experience: how to measure the cost of production, the cost of processing, the cost of marketing. Dairy farmers know how to produce milk, but can it be sold? Or more importantly – at what price?

For many years Full Circle Farm’s milk had been sold to make cheese; a small amount went to the Wisconsin Dairy Grazers Co-op, and the rest was sold to a small employee-owned cheese factory about 60 miles away. Rick and his family chose this factory because it was employee owned and operated under principles they believed in. Both employee-owned and co-operative businesses are built on democratic values and personal responsibility.

Then in 2003, to take advantage of better prices and better marketing services, he moved the family milk output to CROPP Cooperative, which sells dairy products under the Organic Valley brand. His milk now is sold as fluid milk rather than made into cheese.

The Value of a Big Marketing Co-op

A big marketing co-op gives an individual farmer a number of advantages:

Bringing together a large number of members, big marketing co-ops also have some disadvantages:

Coming off his experience with a small co-op among like-minded friends, what was it like for Adamski to join a huge co-op like Organic Valley with more than 1600 farmer-members? “Organic Valley combines a lot of people with similar minds, similar hopes, and similar goals, to work together. It is the pooled resources and the economies of scale that make it work financially,” says Rick. “On the other hand, the co-op really struggles with growth. It’s hard to manage and maintain the democratic principles that they are striving for; though they’ve done a pretty good job, all in all.”

Would Adamski recommend that other small farmers join Organic Valley? “Yes, certainly. Unfortunately there aren’t a lot of choices, but I’m very comfortable with the co-op’s values and direction.” Rick went on to say, “Those principles are strongly embedded in the organization; if that would change, I’d have to rethink my participation.”

The Value of a Partner

Rick Adamski is a living demographic: he represents Wisconsin’s small family dairy farmer in herd size, acreage farmed, and age. And the time is coming when he’ll be retiring.

It can be a daunting task for a beginning farmer to get into the business, and Rick has found a way to get the help he needs to run the farm and to give a young farmer a leg up. (Read more about the challenges beginning farmers face in Where Have All the Farmers Gone?)

Inspired by examples from New Zealand where beginning farmers go through a lengthy apprenticeship, Rick decided to try a milkshare partnership.  A milkshare is a cooperative relationship between a beginning farmer and an experienced farm owner. The Full Circle Farm milkshare is a 50/50 split of inputs, labor, and revenue between Adamski and Andy Jaworski, 27.

After graduating from college with a business and finance degree and completing a beginning organic dairy course at UW Madison, Jaworski was eager to become a full-time farmer. He returned to his family farm and raised organic feed and replacement heifers for Rick.

When Jaworski’s interest turned to building a milking parlor, the two came together to discuss a milkshare agreement. Rather than taking on the debt of a new building, Andy bought Full Circle Farm’s herd and signed a three-year agreement. Instead of investing in equipment and facilities that “rust and depreciate,” Jaworski is investing in cattle, “assets that reproduce.”

In a world where small, family-owned, organic, pasture-based dairy farms seem to be a dying breed, farmers like Rick and Andy are finding new ways to succeed in a business they are both passionate about. And because Jaworski is getting started farming and Adamski is looking to retire, it is a perfect partnership and may be “transitional,” pointing the way to a more sustainable farming future.

To learn more about transitional organizations and how they help families, farms, and communities not only survive, but thrive, read The Transition Companion: Making Your Community More Resilient in Uncertain Times.