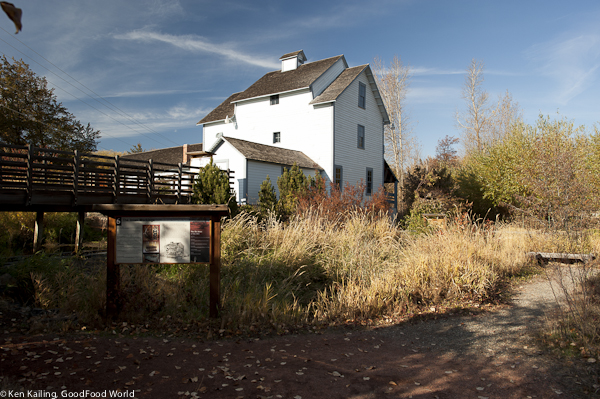 On our way to the Washington Tilth Producers Conference in Yakima, a sign on the freeway beckoned us to explore. Just minutes away, we were in standing in the middle of history.

There are a few remaining historic mills in the state. You’ll find this one located in Thorp, Washington, just off Interstate 90; about 10 miles northeast of Ellensburg.

To power the Thorp Grist Mill, water was channeled from the Yakima River. It stands silent today. The mill no longer grinds flour; it began operation in 1883 and shut down in 1946.

In the late 19th century, there were nearly 160 flour mills in the state of Washington; 22,573 across the US. As the railroad network grew, it became easier to ship grain to the mills and flour to the cities. Many mills were built where there was easy access to water and rails.

Today Washington produces a huge amount of wheat; the 2011 harvest projections are for 126 million bushels of winter wheat and 33.7 million bushels of spring wheat – both substantial increases over 2010. In contrast to 100 years ago, there are two large commercial mills operating in the state, and a few small mills like Fairhaven Organic Flour Mill and “on-farm” mills.

Historically, a water-powered grist mill provided additional benefits to grinding grain! The little town of  Thorp was one of the first in the state to be “electrified” when, in 1906, the energy from the water wheel was used to run a steam generator.

Thorp Mill begins operation in the Kittitas Valley in April 1883.