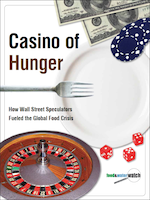 The “Occupy” marches and protests have spread across North America and around the world to thousands of cities. Yet there is little understanding that speculation by Wall Street has contributed to the skyrocketing of food costs. (1)

Where is the connection?

Wall Street deregulation in 2000 removed limits on speculation in futures of agricultural commodities and opened those markets to new players, including funds controlled by some of the biggest investment firms. The collapse of the housing bubble sent investors looking for the next opportunity, and in 2008, commodity markets exploded, driving up grain prices globally.

Grain price jumps affected millions of people, and the UN estimates that in 2008 and 2009, an additional 130 million people were forced into chronic hunger by the food price bubble. Lest we think the effect is over, food and energy speculation keeps going and food commodity prices are as high, or higher, than they were in 2008.

The result is that corn has become 93% more expensive in the past 18 months. The price of rice has gone up 110% and a ton of wheat is exactly twice as much as last year.

That is why stock market speculation on basic food stuffs should be banned. (2)

What exactly is the role of commodity futures markets? Food and Water Watch produced a paper, Casino of Hunger, that explains in simple terms how futures markets work. (4)

A futures contract is an agreement to buy or sell a physical commodity for future delivery of a commodity. These contracts were originally developed to help farmers and food buyers, like mills or food manufacturers, to ensure access to markets and needed inputs at mutually acceptable prices. The futures market is also supposed to be a way to determine what price the market will bear by bringing together market participants and settling on a price.

Although these are contracts are supposed to be for future delivery of a product, most are not bought with the intention of ever taking delivery, instead they are exchanged for other contracts or sold.

During the ‘90s and up to 2008, the Commodity Futures Trading Commission (tasked with policing the futures markets) blurred the distinction between those with a physical interest in a commodity and those with a financial interest in it. As a result, large, purely speculative investment banks and money managers were treated the same as farmers, grain elevators and food processors. And by 2006, non-traditional hedgers were granted exemptions to the requirement that there be limits to the number of futures contracts an investor was allowed to have in a particular commodity. The result was that these investors represented a significant share of long-term futures contracts.

At the same time, the CFTC began to consider agricultural futures contracts as just another “financial instrument” or “derivative” and dismantled the safeguards that prevented runaway speculation in agricultural commodities. And we all know what happened in the housing market when the market for creative financial instruments fell apart!

There are ways that speculation and limits can be regulated, and mandatory reporting required. But in the meantime, food inflation is not to be ignored. Today’s report on the Consumer Price Index, indicated that food prices rose 0.4% in September, pushed up by big increases in dairy, cereals, fruits, and vegetables. Dairy prices have risen 10.2% in the past year. (5)

As long as futures contracts on grain and other commodities are traded as derivatives by speculators like any other financial instrument, we can expect prices to go up and down – “volatility” it’s called – like any index on the stock market. And the 20% of Americans on food stamps, the 9% unemployed, and more will continue to feel the pressure on our food budgets.