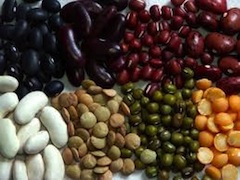 While the interior aisles of an average supermarket are filled with rows and rows of mostly junk processed non-foods, there is one aisle I want to make a fuss over. For the sake of discussion I will categorically refer to it as “aisle 6,” the oasis of the inner supermarket. This is where lifesaving legumes lie; awaiting the kudos they have long been denied. (Legumes include beans, peas and lentils.)  Here is a source of food that is cheap, plentiful, varied, delicious, unbelievably healthy, and so misrepresented in our American diet.

If we want to thrive as a species, I implore America to be the world leader it claims to be – by changing WHAT WE EAT and valuing our responsibility to our planet and to each other. At a time when talk about over eating meat is often comingled with concerns of diminishing land and water resource, not to mention the ill health effects of eating inhumanely agri-farmed animals that belch and toot greenhouse gasses in gargantuan quantities, here’s a fantastically versatile alternative that can be used in soups to salads, entrees to side dishes.

Last Friday (June 17, 2011) the NY Times printed an article from the Aspen Journal announcing Meatless Mondays to the nation. A savvy decision of at least 20 institutions and restaurants are answering a nationwide pro-veggie effort by braving the decision to take a leap of faith into the world of food beyond meat. I realize this is a business decision first, answering to the educated health conscious wealthy consumers of Aspen (albeit the hippie Rocky Mountain high contingent). Each restaurant felt pressured to NOT say NO, lest they lose out on the Monday wave of meatless mastication. Well I think it’s fantastic and would LOVE them to include dishes with lots of legume choices on the Monday night specials list!

Congratulation, Aspen!  Now please put your finger on the pulses (pun alert) of change. (A pulse is the edible seed of various crops of the legume family.) We all know that what the rich and famous value often trickles down to the wannabe masses, and the right vision can really have a powerful impact on mainstream culture. (Remember what happened when Madonna, Sting and Oprah uttered the word Yoga?) May it be so with legumes.

Known historically as “poor man’s meat,” it’s unfortunate that legumes (beans in particular) have long been cast aside as peasant food.  In contrast – status, virility and strength have melded their image with meat.  For this we can thank the meat lobbies, who after decades of “educating” the American public, succeeded in brainwashing us into thinking that eating meat resulted in strong muscles (along with the dairy lobby myth of promulgating strong bones from drinking lots of milk).

Now I’m not advocating that we need to become full out vegetarians but, asking how much meat is enough in this country, is a fair and responsible question whose time has come.  And as much as I’m not an advocate of rating foods based on “nutritionism” (their reductionist component value) we cannot ignore the facts that legumes: come packed with vitamins and minerals, provide tremendous amounts of health benefiting fiber for our digestion and intestines, deliver impressive quantities of protein, cost so very little, AND actually ENHANCE THE SOIL THEY ARE GROWN IN.

That’s right, the most defining characteristic of legumes is that they bear nodules on their roots that contain nitrogen-fixing bacteria, and this enhances the soil. You can buy them dried or canned, organic or not. Even the most expensive organic beans are only about $2.50 for a 15 oz. can, and bought dried in bulk they are even less expensive! Compare that with beef selling anywhere from $3.29/lb. for ground beef, to $11.99 for tenderloin steak, to $25 a pound for grass fed tenderloin.

There’s no reason to wait for the trendsetters of Aspen to spark us into action. How about experimenting with a little haute cuisine of our own this summer? Please do yourself and our planet a favor, and get to know your local oasis in aisle 6. Give yourself permission to experiment a little! And let’s be on the lookout for it to be renamed the Meatless Monday (or any day) aisle.

2 thoughts on “Oasis in Aisle 6 – The Lifesaving Legumes”