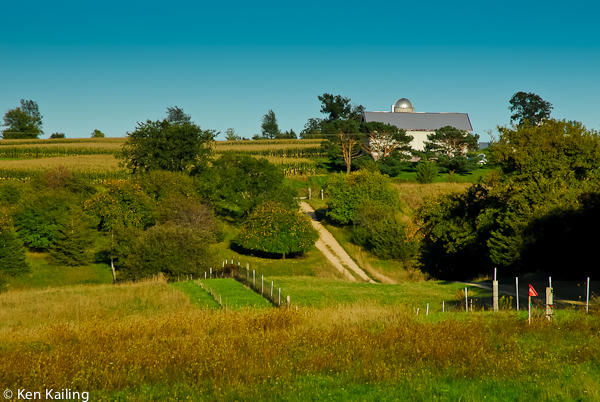 Heading down the long driveway that led to the farm site on that sub-zero day in January 1965, we had no idea the adventures – and misadventures – that lay ahead.

We had been searching for more than two years for a farm to buy. Though we had looked at several that were promising, there were always drawbacks: too large, too small, no well, too close to the highway (we value our pets), buildings in disrepair, etc., etc.

But this farm seemed to fit the bill. It was the right size (80 acres), had a livable house, was far enough off the highway, and only 3 miles from town – the county seat – where my husband had recently started a welding business. Best of all, the price was reasonable.

As we climbed out of our car and faced into an icy northwest wind howling across the ridge above the buildings, I remember thinking, “If we buy this farm, the first thing I am going to do is plant a windbreak.”

And so it was! We did buy the farm that month. We would not be moving to the farm until May 1, the perfect date on which to establish our “Agricultural Homestead in Minnesota.”

The first 1000 are the hardest

During the intervening months we lived in town and my husband was building his business while I was making my plans.

Starting at a point approximately 100 feet to the west of the most southerly buildings and stretching northward for about 500 feet to the point that would be the northwest corner of the wind break, it would then reach about 350 feet to the east.

When sufficiently grown, this wedge of trees would provide shelter from the prevailing northwest winds for the entire building site and would leave a nice space above the house for an orchard.

I was ready! With a call to the Root River Soil and Water District office, I ordered my first 1,000 windbreak trees!

Out of the mouth of a babe

I was making other plans that winter too. As well as reading a lot of children’s books with stories of lambs in them to our 3-year-old daughter, Lisa, I told her stories about the pet bottle lambs that I had as a little girl. She loved the stories and begged to hear them over and over again.

One day after all the paper work connected with the purchase of the farm was signed and sealed, I promised Lisa when we moved to the farm in the spring we would try to find her a baby lamb for her own. She was thrilled!

We had lots of conversations about what she and her lamb would do together, but it was always just “the lamb;” no name was ever mentioned.

In the midst of our lamb talks one day, I offhandedly asked what she was going to name her lamb. Never missing a beat, she said something that sounded to me like, “Shirt-ago.” What a strange name for a lamb! But I kept quiet…

Later it suddenly dawned on me! Of course, “everywhere that Mary went, the lamb was sure to go!” So, that was it! Lisa’s lamb was going to be “Sure-to-go!”

Now, I don’t think I was deliberately laying the foundation for a future sheep flock, but in the far recesses of my mind a plan was being hatched. Who knew?

The windbreak trees arrived in mid-April and Lisa and I – and our two fox terrier pups – made daily trips to the farm. I measured, set guideposts to keep the rows straight, and started planting the seedling trees.

All the while my daughter and the dogs had a great time running hither, thither, and yon, and enjoying the spring sunshine.

Hand planting 1,000 trees is a time consuming process. Even at a record-breaking pace of one tree every two minutes, you can only plant 30 trees in an hour!

Slam the heavy tree planting bar into the ground as hard as possible, jump on the bar to force it in further, and then pry it forward and backward to make a nice roomy space for the tree roots. Next prune the roots a bit and remove any broken ones, place the tree in the hole, slam the tree bar into the ground – again(!) – and pry the soil forward to make good contact with the roots. It all takes time – and muscle…

After a few hours of this, your arm and shoulder muscles scream, “enough!” You have to give it up for that day; but you live to fight another. Eventually, your muscles toughen up and the job becomes rather enjoyable as you make progress toward finishing something you really want to do.

You are out in the fresh air and sunshine, there are songbirds everywhere, and life is good!

I found enough room for another half row made up of a dozen larch trees, a few silver maples and black walnuts, and 20 or so ginnala maples.

It took a good many years before we were able to really enjoy the benefits of the windbreak, but eventually the trees grew tall enough to bounce the winds up and over the homestead. All the effort paid off in comfort and lower heating bills, as well as added to the beauty of the farm.

Mid-May arrived and we were fairly well settled at the farm and loving it. But there still remained that matter of finding a lamb for Lisa.

On a fine Saturday morning we set out to get one. I didn’t anticipate any problems; I grew up on my grandfather’s farm in Iowa where we had a sheep flock. I knew there were almost always lambs that were orphaned or needed bottle-feeding because an ewe didn’t have enough milk. Most busy farmers were glad to be relieved of the nuisance of feeding a bottle lamb; so finding one shouldn’t be a problem.

We headed for the nearest sheep raiser in high hopes – no bottle lambs. The farmer mentioned several other farms that might have lambs, so off we went. We stopped at farm after farm … no one had a “reject” lamb.

Desperation was setting in; I had promised this child a lamb and there were none to be found.

Finally, we arrived at the last farm on our list. Alas, no lamb for us! We were directed to a large farm nearly 20 miles away that had a large flock and would likely have an orphan or two.

Nope! We came up empty handed again. I explained my plight and out of kindness the farmer offered to sell us an “old” ewe and her lamb. Grateful, I quickly agreed to the suggested price and arranged that the pair would be delivered to our farm in a day or two.

A few days later an ewe that was getting a bit gray around the muzzle and her stout, month-old ewe lamb, arrived. Both were as wild as March hares!

Unfortunately our farm was sadly devoid of fences. Actually there were fences here and there, but they were mostly buried in the sod. We spent years digging and pulling them out! So the alternative was to tether the ewe so she could graze, but not escape. The lamb, which was still nursing, stayed with her.

So this was not the cuddly little lamb we had promised, but it didn’t matter to Lisa! She was delighted with our two sheep – and we had the beginning of a flock.

In time they settled in. After being moved and handled every day, they even became fairly tame.

And of course, every where that “Mama” went, her lamb was “Sure-to-Go!”

One thought on “Voices From the Farm: How Lea Found Her Farm”