Raising more than 400,000 pounds of hay and grain to produce more than 48,000 pounds of meat and 4,500 eggs on 150 acres of farmland is no small job. And to do it with the summertime help of 2 full-time interns and a permanent part-time worker means that Jennifer Argraves and Louis Sukovaty are literally running from sun up to sun down. Jennifer also has 2 helpers “behind the scenes” that help her manage the sales and marketing of the farms’ products at area farmers markets and to CSA customers. 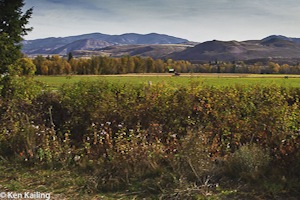 Located in the Methow Valley in North Central Washington, Crown S Ranch is the farm where Louis grew up. It was the education he received – and life partner he found – at the University of Idaho that make all this production all possible.

Louis is an electrical and mechanical engineer by trade and Jennifer is a civil engineer. Both apply their systems thinking to every project on the farm, looking for ways to let the “process” do all the work. While both Jennifer and Louis grew up on family farms, they are engineers first and farmers second.

Today Louis applies his skills to the management and operation of Crown S Ranch while Jennifer uses her systems thinking for efficient – and effective – sales and marketing of their products and programs, like their meat CSA.

Producing comparatively large amounts of meat from a small amount of acreage involves a process Louis has developed to “layer” various kinds of animals on the same pieces of land, each one a necessary part of a complete ecological cycle. All the animals are rotated or moved from one temporary paddock to another to graze and they are put in the same paddocks in a particular order.

When Louis and Jennifer took over the farm in 1999, it required one and a half acres of land to feed and finish a cow; just over 10 years later it takes less than half that amount. Sheep, pigs, chickens, and turkeys have been added and the result is more meat production on the same amount of land.

Beef cattle eat the largest quantity of forage so they are the first species in the “stack.” On Crown S, cattle are fenced into paddocks with lightweight electrical fencing and are moved every 24 hours. 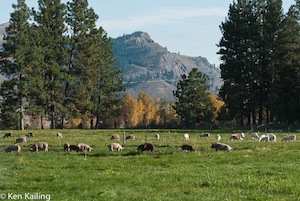 Sheep are confined in similar paddocks and rotated as well, however sheep crop the forage closer to the ground than cattle. Cows are kept on the pasture only long enough to eat the grasses down to about 3 inches; sheep will eat the plants further down.

Pigs are rotated in their own paddocks – moved every couple of days – on an area that will be used for growing a vegetable crop the following year. Because pigs overturn the turf, they are acting as living “rototillers” and turn all the soil in a season to prepare it for planting.

Chickens follow the cattle through their paddocks and eat grass, bugs, worms and the maggots that develop in the manure. By intervening in the lifecycle of the horn flies and face flies that attack the cattle, the chickens eliminate the need for pesticide treatment.

Each species grazes differently which controls weeds, pests and parasites in different ways. And each in turn adds manure of differing character to build soil fertility and improve soil quality.

By developing the right ecological niches, Louis believes you can continue to stack additional species on the same land, complementing those that are already there. This is similar to the way natural communities grow in complexity through succession. From his perspective, the cycle will function indefinitely and, if managed properly, would be interrupted only by some kind of system-wide disaster like fire or flood.

By applying a combination of traditional and modern technology with careful animal husbandry, Sukovaty takes advantage of systems and processes to reduce the workload and eliminate the need for chemicals used as herbicides and pesticides, or for animal health.

The farm is mapped using a computer-aided design and engineering application, which lets Louis plan the use of the farmland throughout the season. Paddocks for rotation are laid out, inputs and outputs are calculated, and irrigation systems are mapped. 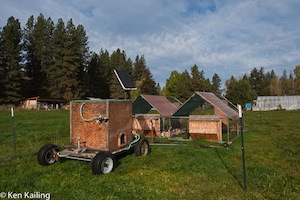 Additional computer technology is incorporated in the solar-powered “chicken train” – light weight, yet sturdy, floorless wire houses that are moved across the landscape several times a day. Housing up to 100 chickens in each of several units, the train uses a solar panel and circuit boards programmed with a laptop computer to power movement that takes 20 minutes to move 20 feet, three times a day. The solar panel also powers an automated watering system and the electrical fence that surrounds the houses to deter predators.

The chickens graze and get their protein from the insects in the grass and fertilize the soil by scratching the surface to incorporate their manure.

On the other hand, a passive flytrap is a very low-tech solution for biting flies that light on the cattle. From a pre-World War II design Sukovaty discovered on the Internet, he built a trap that brushes flies from cattle as they pass through it. The flies are captured in a series of mesh baffles and held there until they die. The dead flies are then composted or fed to the chickens if they need additional protein.

By resurrecting certain elements of traditional animal husbandry, Louis has eliminated the need to treat his cattle for pink eye and hoof rot. For generations, farmers assumed that the diseases were contagious because so many cattle in the Methow Valley caught them. As a result, when a cow was diagnosed with the diseases, the farmer gave the whole herd antibiotics to prevent the spread.

The cause is bacteria that grow in the soil and, while the diseases are not contagious, every animal in the heard can get them. Research turned up a solution in a 1905 study conducted by Washington State University that indicated the bacteria grow in soils deficient in copper, like those of the Methow Valley. Conventional farmers will use antibiotics as a preventative; Louis simply adds traces of copper to the salt lick and the cattle stay healthy by ingesting the copper they need. 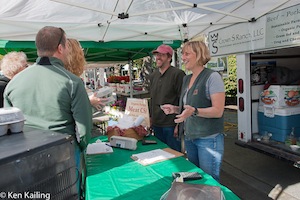 On Crown S Ranch, Jennifer and Louis have focused on developing ecologically balanced management that will turn the farm into a closed system. Ultimately all the inputs will be from the farm and everything except the meat that is sold as food will stay on the farm to become part of the nutrient cycle.

All the animals except the calves are born on the farm; the calves are born and raised for their first year on a neighboring farm and finished on Crown S. Much of the lumber used on the farm for fences and buildings is harvested from the land, the rest is scavenged and recycled. Kitchen scraps are fed to the animals with the caveat that no animal will be fed scraps of the same species. Offal, feathers, and other waste from harvesting the animals is composted and spread on the fields to nourish the soil.

The hay needed to feed the cattle and sheep through the winter is grown on the farm and Louis is experimenting with a variety of grains planted together to grow feed for the chickens, turkeys, and pigs. Instead of planting fields of mono-crops and mixing the grain after it is harvested, he is “mixing the feed” in the field by growing the grain together in the proper proportions. As a result, he harvests “feed” not grain.

By working with natural systems as part of the local ecology, Jennifer and Louis have eliminated the use of chemicals, fossil fuel fertilizers, and preventative antibiotic treatments. “Create a healthy environment and you will have a healthy animal,” says Jennifer. “That’s why our motto is: Better for the animal, better for the environment, better for you!”