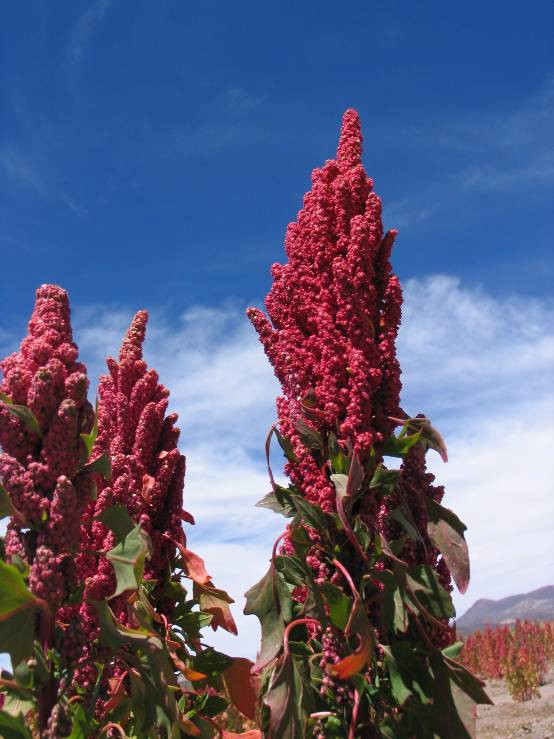 (Attend the conference “virtually” by viewing these slideshows: Day One Day Two Day Three
Click on any of the images below for a larger version.)

Quinoa (Chenopodium quinoa, spp.), a plant native to the Andean Mountains, is so important a food source that the United Nations Food and Agricultural Organization (FAO) named 2013 as the International Year of Quinoa (IYQ) to recognize the Andean indigenous peoples who have maintained, controlled, protected and preserved quinoa as food for future generations.

As part of the Year of Quinoa, the International Quinoa Research Symposium drew researchers, seed breeders, and growers from 22[1] countries, the US, and Canada to the small college town of Pullman WA, on the border between Washington and Idaho. The Symposium, held August 12-14, 2013, served as both a platform for debate over access to seeds and seed genetics and  an information exchange about research projects around the world.

To do so, said Ms. Santivañez, “means that researchers need to be able to breed, plant, and test new and existing varieties of quinoa to identify the best match between seed and environment.”

That said, researchers in the audience loudly voiced their concerns about access to quinoa germplasm (seeds) held by the Bolivian government. Make no mistake, quinoa researchers are not hiding behind lab coats, they are field scientists with dirt under their nails and strong opinions.

Who Controls the Germplasm?

Beginning in the 1960s, a number of seed banks (germplasm banks) have been set up throughout the Andean region to protect the vast variability of quinoa from the area. Bolivia has the largest germplasm collection, maintained in six genebanks and under storage that will preserve seed viability for 80 to 100 years.

Universities, agricultural organizations, and governmental agencies are in charge of the management and conservation of the germplasm. Unfortunately agreements in place by the Bolivian government to protect quinoa as a national resource make it difficult to exchange germplasm with other nations for research and for crop development. Through a “Biodiversity Agreement” established in 1996, Bolivia regulates the exchange of genetic materials by limiting access by countries outside its borders. The US has NOT subscribed to the agreement.

While import/export companies view quinoa crops as an opportunities to access global markets, researchers believe that protecting plant diversity is the most important challenge, especially in this time of climate change. In other words, the germplasm is more valuable than the crop.

Even researchers in the Andean region are finding access difficult and many at the Symposium said the country-by-country agreements are too limiting. Researchers attending the event pressed Ms. Santivañez to encourage the FAO to formulate a global understanding that would allow both the scientific and agricultural communities to share the knowledge and benefits of the existing genetic diversity.

Why Is Quinoa So Important? The Mother Grain

As early as 7000 years ago there is evidence of a relationship between grazing animals such as llamas and wild quinoa. Even today, the farmers say, “Without llamas, there is no quinoa.”

Quinoa, a pseudo-grain closely related to a North American weedy plant, Lamb’s quarters (Chenopodium album), was first domesticated about 5000 years ago on the high plains surrounding Lake Titicaca. The Lake, which straddles the border between Bolivia and Peru, sits at an elevation above 12,000 feet.

Quinoa is remarkably adaptable to an extremely wide range of climatic conditions. It can be grown from sea level to an altitude of more than 13,100 feet, in near desert dryness to near tropical rainfall, survives temperatures from 17°F to 100°F, and tolerates water and soil with saline levels approaching that of salt water. In Egypt, for example, quinoa is being grown in salt marshes.

The ability to grow – and thrive – in such diverse conditions has made quinoa one of the alternative crops of choice for countries suffering from food shortages since it is also especially suited for smallholder and subsistence farming.

And today, with so many references to “super food,” quinoa is one of the few foods that could rightfully claim such a name. It is the only plant food that contains all the essential amino acids, vitamins, and minerals needed for human health. The grain, leaves, and flowers are all edible and the protein content of the seeds ranges between 13.8% and 21.9% depending on the variety.

Quinoa – the Mother Grain – was second only to potatoes in nutritional importance to pre-Columbian Andean civilizations. For millennia, indigenous peoples maintained, controlled, protected, and preserved hundreds of varieties of quinoa through principles of collectivism, redistribution, and by living in harmony with nature.

Before the arrival of the Spanish in 1531, the communities of the Incan Empire developed sophisticated means of producing food in diverse – and challenging – environments. Collectively managed raised beds and terraces sustained over 15 million people with an abundance of grains, roots, legumes, vegetables, fruits and nuts.

Traditionally, quinoa seeds were roasted and made into flour from which different kinds of bread were baked. It was also cooked, added to soups, used as a cereal, and even fermented into beer or chicha, the traditional drink of the Andes.

After the Spanish conquest of South America, the colonists looked down on quinoa as peasant food or food for Indians. And the Catholic Church actively suppressed its cultivation because quinoa was used as a sacred drink (Mudai) during indigenous religious ceremonies such as Nguillatun, a ceremony that included animal sacrifice.

For hundreds of years conquest-disrupted systems of land use and exchange forced the Incas to work as miners or laborers on plantations and native crops were replaced by wheat and barley.

Although a social revolution in the early 1950s put farmers back in control of their lands and communities, modern agricultural technology and the concentrated pressure of world markets for cash crops discouraged native foods and self-sufficiency. Also in the 1950s, the US started shipping surplus wheat to Bolivia as “food aid,” creating a dependence on imported wheat that still exists.

Extreme free market policies instituted in the 1980s again drove small farmers from their land, some moving to the cities and others to the tropics to grow coca – the last smallholder crop with a viable market. Bolivia is now one of the world’s major cocaine producers.

Considered one of the eight global centers of crop origin and diversity, the Andean region is still where the greatest genetic diversity of both wild and cultivated quinoa can be found. The shores of Lake Titicaca (on the border between Bolivia and Peru) are the area of greatest diversity and genetic variation.

Clearly there are big market opportunities for Andean quinoa around the world, primarily in North America (US and Canada) and Western Europe, where consumers have discovered the health values of quinoa as an alternative grain. And as more shoppers look for gluten-free products, the demand for quinoa will continue to rise.

While quinoa is native to all countries in the Andean region, from Columbia to northern Argentina and southern Chile, quinoa produced for world markets comes primarily from Peru and Bolivia. According to the FAO, in 2012, Peru produced 44,210 metric tons (tonnes), Bolivia produced 37,500 tonnes, and Ecuador produced 800 tonnes. More than 90% of Bolivian exports are “quinoa real” or “royal quinoa” which has larger whiter grains.

Data from Peru shows that the quinoa export volume, export value, and unit price have risen continually over the last five years (2011 is the most recent information available). The market value grew more than 8 times, the weight shipped grew more than 3 times, and the unit value (per kilo) increased almost 1½ times. Presently, package prices for quinoa range from $6 to $9 per pound from major retailers, while farmers receive about $3 per kilo – about 2 pounds. And in 2011, 64% of Peru’s exports went to the United States.

As demand grows, more farmers and researchers are looking for varieties that will flourish outside traditional locations. North American and European growers are testing new varieties, particularly those with shorter growing seasons or less saponin – the bitter coating on the seeds that discourages birds.

At the same time, quinoa is being viewed as the grain that will feed the world. Because quinoa will grow under such diverse environmental conditions – from the mountains to the tropics, seacoast to desert, in acid to alkaline soils – and it is well suited to smallholder subsistence farming, there is great potential in countries with high levels of food insecurity and malnutrition.

The enormous potential demand for quinoa has encouraged expanded research for both high volume commercial production as well as small volume, smallholder farming for subsistence. And when there is the potential for vast sums of money to come from the breeding, growing, processing, and distribution of quinoa, the issues of politics, legality, and morality rapidly come to the forefront.

At the Quinoa Symposium, researchers from nearly two dozen countries – some of whom could benefit greatly by the ability of their population to produce a high-protein, nutrient-dense food under extreme conditions – voiced anger and frustration at the methods put into place to control the germplasm. From their perspective, “The germplasm is more valuable than the crop. Being able to protect diversity is the most important thing.”

On the other hand, a move in 1992 by the Colorado State University to patent a method of hybridizing quinoa that would have controlled 44 traditional Andean quinoa varieties threatened exports and possibly local production. In 1998, after pressure from the Bolivian government and various non-governmental organizations in the US, Canada, and Denmark, CSU let the patent lapse. And where did those seeds come from? CSU scientists simply collected them close to a small village near Lake Titicaca.

There is even a name for this kind of patenting: Biopiracy, which refers to the use of intellectual property rights (IPR) laws to gain monopoly control over genetic resources that are based on the knowledge and innovation of indigenous peoples.

The key question is this: How to manage the quinoa germplasm to protect the genetic diversity while at the same time allowing breeders and growers to develop varieties versatile and productive enough to meet food security needs and market demands?

Underlying the issue of protection versus production is an even deeper, more perplexing question: Is it possible to protect the intellectual property that has been developed by the indigenous people of the Bolivian and Peruvian high plains over millennia? As more quinoa is grown outside the Andean, it is likely that new varieties and new growing techniques will out compete traditionally-sourced products.

At the Symposium, a small group of Bolivian farmers, representing several thousand growers, quietly and passionately asked for help in devising a system that would recognize the thousands of years of care and toil by farmers protecting and improving the diversity of quinoa.

These farmers want to share their knowledge, learn from others, and learn “best practices” for production, especially organic production. At the same time they want to balance their intellectual property against worldwide competition.

The Future of Quinoa

Perhaps the true value of quinoa production is immeasurable. What value do to you assign to being able to feed malnourished populations in food-insecure nations? What value do you assign to cultural identity, good health, and human rights? To communities coming alive again when young people return?

There are solutions to consider:

Many thanks to the inspiring people we met at the Symposium – please note this is a short list, there were so many wonderful people in attendance:

The International Quinoa Research Symposium was recorded and all sessions are available here.

One thought on “Quinoa: The Passion and The Politics”