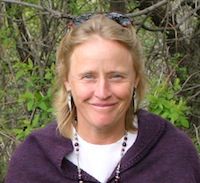 “I think about my own roots. A line of women sprout in a garden row: my mother squatting between vegetables, weeding; behind her my grandmother, forking hay to draft horses; then great-grandma on a wooden kitchen chair, her misshapen feet soaking in a basin of hot water. They continue in a chain, this generational sequence of strong women who gave birth in succession. Women who nurtured and fed life. Women who grew and prepared food.” 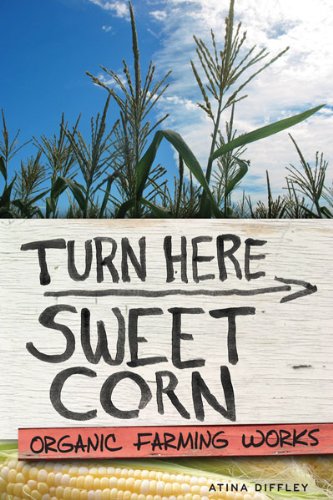 Two books written by two women, one a farmer and one a journalist. More than two decades separate them in age, yet both write about food – growing it, preparing it, and eating it. No, these are not the “usual women’s books.” These are not diet books nor cook books, but books about their very personal experiences around food.

Atina Diffley, author of Turn Here Sweet Corn, is a farmer who writes of more than 20 years on a Minnesota organic produce farm with words that resemble free verse and sing with beauty. Those words also tell of her fear, panic, joy, and contentment in her life choices.

Tracie McMillan‘s book, The American Way of Eating, is a work of undercover journalism, and takes a personal look at the business of food. McMillan works as a migrant worker, a produce handler at Wal-Mart, and a kitchen “expediter” at an Appleby’s Restaurant.

Two women, one more than 20 years the other’s senior, share similar experiences in the fields; for example, both picked produce as migrant workers. For Atina it was a very real means of survival and for Tracie it was an opportunity to document the treatment of seasonal pickers. Tracie carried with her the knowledge that she could – and did – leave when the going got too hard; Atina could not.

Both write of warm supportive relationships with the other workers. In fact, it is the thread of community that runs through both books. Tracie focuses on the generosity of the farmworkers who share their homes, their kitchens, and their food with her. Atina and her husband, Martin, when faced with the destruction of their farm – for the second time – are able to prevent an oil pipeline from cutting the heart out of their farm with the support of thousands of people. There are letters from university scientists, organic certifiers, restaurant owners, produce managers, doctors, generations of customers, and chemically sensitive clients.

Together these thousands of letters, as well as hundreds of detailed documents and hours of expert testimony, convince the judicial system that the pipeline proposed by one of the largest privately-owned companies in the world – and a notorious polluter – Koch Industries, should not threaten their farm or those of surrounding organic farmers.

Both women are strong advocates in their own right, yet there is a faint hint that Tracie is more dependent on the “kindness of strangers” – more often men – than Atina has ever been.

When Tracie gets into trouble – illness while picking or falling behind in the Appleby’s kitchen, for example – it is the men around her who protect her and help her. They steer her to the shady side of the row she’s picking or lend a hand to move dinner plates from the kitchen to the dining room.

Atina stands strong – a true partner – with her husband as they face down disaster. Together they farm, feed thousands of people, and convince “the powers that be” that their organic farm should not be destroyed.

It should be saved as a shining example of good food, good neighbors, and good business.

Read more about these books here: