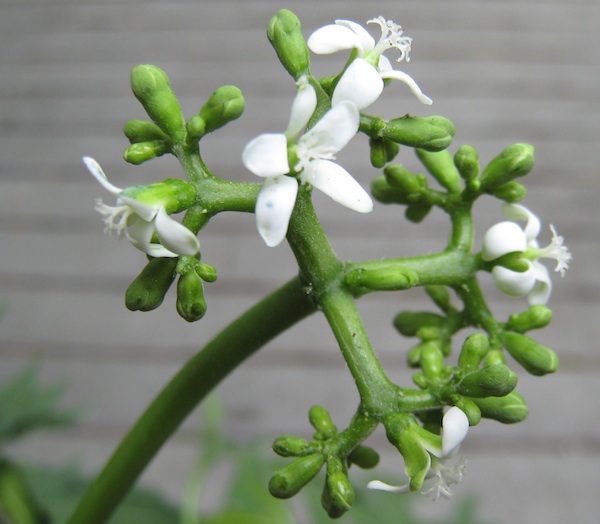 On the minus side . . . it is freeze-tender; its leaves should be cooked rather than ingested raw; it has but few cultivars, and their relative merit and behavior are practically undocumented. Overall, more people should know about, and grow, Chaya — hence this article.

The book Edible Leaves of the Tropics was my introduction to Chaya. Inasmuch as I am in the midst of a multi-year study of edible houseplants, this book has proved most useful. Though no houseplant guidebooks known to me suggest Chaya, nonetheless it was worth testing indoors. After all, some of its cousins have been tried sparingly as houseplants, such as Jatropha Podagraia (Gout Plant. Nettle Spurge. Tartogo. Australian Bottle-plant. Buddha Belly Plant. Guatemala Rhubarb), and Manihot esculenta (Bitter Cassava. Manioc. Tapioca. Sweet-potato Tree. Brazilian Arrowroot. In Spanish: Yuca).

Moreover, various people have reported on the internet that they have treated Chaya as a container plant: inside during winter, outside during summer. For example, Neem Tree Farms on its website reports of Chaya: “In colder climates they grow well in a sunny window, although you’ll want to put them outside once temperatures are consistently above freezing. They’ve consistently come back from the ground with temperatures as low as the mid-20s, but they’re among the first plants to lose their leaves when it gets near 30 degrees.” Therefore, I bought a mail order Chaya plant in August 2010. It flew from Florida to Seattle in an airplane.

In the preface to the 3rd (1998) edition of the aforementioned book, Dr. Franklin W. Martin ranks Chaya as one of the top 5 perennial tropical leaf crops: “of the thousands of leafy vegetables available throughout the tropics, relatively few are great winners, and these should be emphasized first.” (p. ix) “Chaya is an extremely promising species for its high nutritional value, exceptional drought tolerance, and productivity even in very poor growing conditions. An attractive perennial shrub, it produces abundant quantities of large, dark green leaves. Chaya thrives on a wide range of soils in both hot, rainy climates and areas with occasional drought. It prefers good drainage, but can survive some waterlogging. Leaves are larger and more tender when grown in partial shade.” (p. 30).

My Chaya experience has been positive. It grew indoors during the cold months of Seattle, and was brought outside by July. The shock of changing from the subdued inside light to the direct sunshine outside, sunburned its leaves –but the plant grew a new set. Then I brought it back inside. I easily rooted a cutting from it. There were a few spider mites at one time, but they have been long gone. I fertilize mine with Safer brand Oxygen Plus liquid “plant food” — mainly a nitrogen fertilizer. I keep the plant warm when indoors, ideally between 67 degrees F at night and about 10 degrees warmer during the day. Supplied with ample water, it makes non-stop growth. If it were in a cooler, drier, part of the house, it certainly would grow less.

Chaya leaves are used as one would cooked spinach or chard; they can be used to wrap tamales, and have been juiced. In the kitchen, I use Chaya leaves in boiled dishes, frying, and as pizza toppings. Cooking is vital: “Uncooked Chaya leaves contain a cyanogenic glycoside [linamarin] that produce hydrogen cyanide upon tissue damage. The cooking time required to lower HCN to safe levels is about 15 minutes.” [Plant Resources of Tropical Africa: Vol. 2, Vegetables (2004); p. 200]

Other reports, and my own experience, have demonstrated that one need not boil for so long; 3 or 4 minutes seem to suffice. But the safe time required will depend on the clone cooked; the quantity; and even the cookware. It is widely reported that people ought not cook Chaya in aluminum, because a toxic chemical reaction can cause diarrhea. I have tested this, and my clone’s un-chopped leaves, boiled 4 minutes in an aluminum pot, have not bothered me. Still, you should figure “better safe, than sorry” — so avoid aluminum. If that is not enough, a 2006 ECHO Plant Information Sheet cautions: “Avoid breathing the vapors produced during cooking Chaya.”

However, at least 4 Chaya cultivars / clones have been named (described below); each with unique cyanogenic glycoside levels, as well as nutrition, yield, and — perhaps — cassava common mosaic virus prevalence. I hope someone grows all 4 cultivars in one garden, observes and tests them. Ideally, virus-free plants would be compared to virus-containing plants. A possible place for this to occur is the Educational Concerns For Hunger Organization (ECHO) of Fort Myers, Florida. ECHO published several articles on Chaya (available from its website) and helpfully sends all over the developing world cuttings of Chaya and other edible tropical plants.

The botanical history of Chaya is as follows. In the 1700s originally classified in genus Jatropha, Chaya and its relatives were transferred to genus Cnidoscolus in 1827, by Johann Baptist Emanuel Pohl (1782 – 1834). The unwieldy name Cnidoscolus was derived from the Greek knide (nettle), and skolos (thorn, prickle or sting). The initial c is silent, so pronunciation is ni-dos-kol-us, with the accent on either the second or third syllable.

Cnidoscolus is more closely related to Manihot than to Jatropha. Estimates of the number of Cnidoscolus species vary from 50 to 93. All are herbs, shrubs or trees from the New World, specifically the southern U.S. (only 4 species of dry sandy woods; with common names such as Tread-softly, Spurge Nettle and Bull Nettle) into South America. In the 2001 book Food Plants of the Sonoran Desert by Wendy C. Hodgson: of Cnidoscolus species, 9 are known to have edible leaves, protein- and oil-rich seeds, and potato-like roots (p. 160). Some species are used medicinally. One, Cnidoscolus elasticus Lundell of northen Mexico, is a source of rubber, its latex containing 44 – 50% rubber.

Most Cnidoscolus species are protected by horribly stinging hairs, more painful to human skin than common nettles (Urtica species). In the wild, the ancestor of the domesticated Chaya grows from extreme S Texas to Colombia; from sea level to 4,265 feet (1,300m) elevation in moist and dry thickets in open forests. It can survive high temperatures, deep shade, periodic inundations or droughts. But it stings people.

In 1944, botanist Rogers McVaugh (1909 – 2009) separated the cultivated from the wild species; Chaya mansa is domesticated and sting-free, while Chaya brava is the wild stinging form; Chayamansa is a hybrid word of the Mayan chay and the Latin mansa meaning house, dwelling or farm. McVaugh’s specific name Chayamansa refers to the domesticated Chaya only. But in recent years, taxonomists prefer to use the designation Cnidoscolus aconitifolius Chayamansa Group to refer to the stingless (or practically so), cultivated Chaya plants. Calling them a separate species (Cnidoscolus Chayamansa) from Cnidoscolus aconitifolius is unwarranted.

Sometime in the pre-Columbian period, Chaya’s cultivated, non-stinging versions are believed to have originated by the Maya in SE Mexico’s dry tropics in the Yucatán Peninsula, and were exported to nearby Belize and Guatemala. Chaya was introduced to Cuba, and thence by Dr. Mario Calvino to Florida in 1918 (USDA Department of Plant Introduction accession No. 46862). The famous plant explorer David Fairchild wrote in 1947: “a favorite vegetable with us in early summer. Its tender shoots make spinach seem uninteresting, and fritters made from them can’t be beat.”

Curiously, in Mexico the consensus is that the stinging Chaya plants taste better than the stingless cultivars. Jim Conrad’s Naturalist newsletter August 1st 2010, supplies an overview: “In most of Mexico this is called Mala Mujer (mu-HER), which translates to bad woman, because the plant abundantly bears long, sharp hairs that produce burning, nettle-like stings. There’s a cultivated form of Mala Mujer known as Chaya. Chaya is one of the Maya’s most important plants, for it bears few or no stinging hairs, and its leaves are good to eat, very tasty and unbelievably nutritious. Chaya is richer in iron than spinach, and is very rich in potassium and calcium. Chaya’s leaves are much less deeply lobed than those of Mala Mujer, and the whole Chaya plant is less gangly looking than Mala Mujer –more leafy and compact.”

Comparing the high-end reported protein, mineral and vitamin content in Chaya leaves (essential amino acids and antioxidants, too), with the levels in spinach, kale, alfalfa, and so on, Chaya is understandably hyped as the Maya miracle plant and a super food. It is eminently healthy and worth eating. As to the many claims of its medicinal value, I am not going there; many and diverse claims exist. If Chaya accomplished even 10 per cent of healing powers claimed for it, it would be notably valuable.

Cultivation of the stingless Chaya is from cuttings. The most common clones usually set no seeds, though one (‘Picuda’) readily does. Unpruned or uneaten, a Chaya can grow to 20 feet (6m) tall. The plant has a white, sticky sap that can irritate human skin. Leaves can measure 4 to 15 inches in diameter, on stalks as long, and be shallowly or deeply lobed. They are dark green on top, paler green and glossy beneath. According the the cultivar they vary in shape, though are more or less maple-like. ‘Chayamansa’ is by far the most common overall –but not necessarily in U.S. commerce; its leaf has 5 obovate strongly overlapping lobes. ‘Estrella’ leaves have 5 spreading, not overlapping, strongly toothed lobes. ‘Picuda’ leaves have 5 to 9 narrow strongly toothed to pinnatifid lobes. ‘Redonda’ leaves bear 3 toothless to slightly toothed lobes. I guess my cultivar, shown in the photos below, is ‘Picuda’. The leaf margins have tiny glands at the teeth, that can secrete a clear sap. Chaya flowers are small, white, sweetly fragrant, especially at night –to attract moths.

Some of the information above was kindly provided by Dr. Jeffrey Ross-Ibarra of UC Davis. If you seek additional data on Chaya, I advise that you consult a published journal article of 16 pages that goes into much valuable detail about the plant, and includes an extensive bibliography: The Ethnobotany of Chaya (Cnidoscolus aconitifolius ssp. aconitifolius Breckon): A Nutritious Maya Vegetable by Jeffrey Ross-Ibarra and Alvaro Molina-Cruz Economic Botany 56(4): 350-365. (2002). 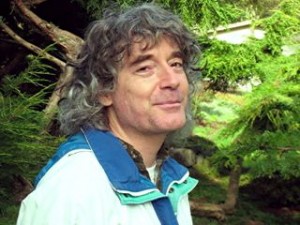