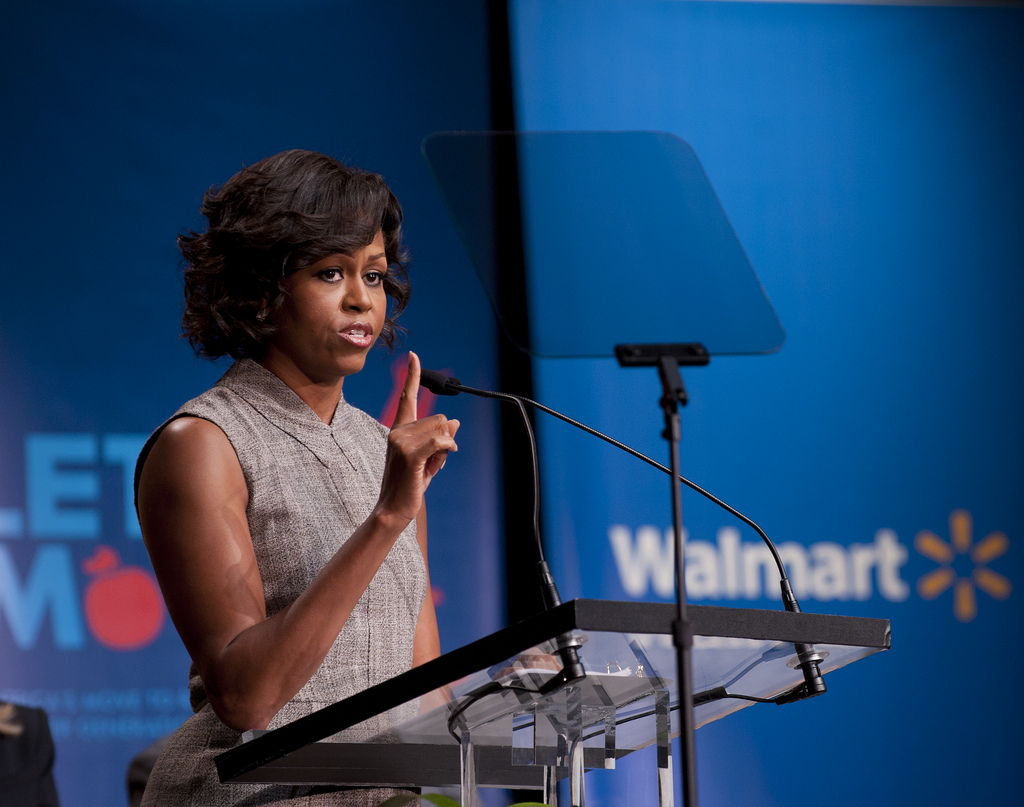 Last week First Lady Michelle Obama made her second appearance this year with executives from Walmart as she announced that Walmart and other retailers plan over the next five years to open or expand 1,500 stores in areas without easy access to fresh fruit, vegetables and other healthy foods.

In January, Michelle Obama added the power of her presence to Walmart’s announcement of its Nutrition Charter, an initiative for healthy eating. Mrs. Obama has championed the problem of childhood obesity since her husband took the office of President in 2009.

Walmart then announced plans to address the problem of “food deserts” – poor urban areas that do not have supermarkets. Studies have linked low-income neighborhoods to higher rates of obesity; price and availability of healthy foods are key factors in increased obesity rates.

Unfortunately while Walmart is expressing its concern and commitment to feed the hungry, it is contributing to the population of working poor. The average Walmart “associate” makes $11.75 an hour, slightly below the national average for retail employees of $12.04 per hour; totaling about $20,700 a year in wages.

In a one-earner household, $22,000 is the poverty line, and in 2008, 65% of working families that received SNAP were single-parent families. One must assume that a large number of the 1.4 million people working for Walmart In the US (1% of the 140 million working population) are represented. In Ohio alone, for example, more than 15,000 of its workers are on Medicaid, and more than 12,000 are receiving food stamps.

Yes, Walmart says that reducing the price of fruits and vegetables doesn’t mean they will pay farmers less – they will just reduce their profit margin. How long will that last when stockholders start pushing for higher profits?

Yes, Walmart says they will save money by buying fruits and vegetables from local suppliers to save the cost of transportation. Unfortunately, those “local” producers will most likely be industrial farms that can push their production processes to cut costs. Small, independent farmers don’t have the capital, the staff, or the processes to keep cutting back on the prices they need to charge.

It is more important than ever for us to build local food networks of small farmers and producers to insure an alternative to the national/international spider web of food production and distribution that is developing under the control of a handful of global food companies collaborating with the world’s largest retailer.

Read But Michelle, Walmart IS a “Food Desert” for another look at Walmart’s strategy.