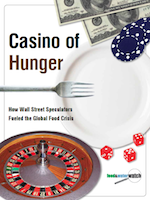 Food and Water Watch has published a new report that examines how speculation on the commodity markets – which include agriculture – drove up prices. In the spring of 2008, huge jumps in food prices – up nearly double in the previous two years – triggered food riots around the world.

Was that caused by a bidding war that pitted food processors and agricultural companies against investment firms that had no intention of ever taking delivery of a load of corn, beans or wheat?

The global food crisis is an overlooked symptom of the broader global economic crisis. The food crisis shares many characteristics of the financial meltdown ‚ it was exacerbated by the deregulation of the commodity markets (including agriculture) that encouraged a tidal wave of Wall Street speculation‚ leading to further increases in already rising food and energy prices.

Over the past two decades, the safeguards that prevented excessive speculation from distorting the futures markets were eroded or eliminated.