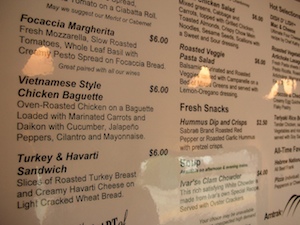 What will 2011 bring us in the world of good food? Mintel, a leading market research company, this week published their Mintel Menu Insight Top Five Foodservice Trends for 2011. At least, three out of the five lean toward “good food.”

The Good (or at Least, Better)

Trend #1: Healthy by Association Sixty-two percent of consumers say they plan to eat healthier in the upcoming year, but many complain that healthier food doesn’t taste as good without the added sugar, sodium and fat.

Consumers enjoy visiting restaurants that are perceived as healthy because these venues make them feel good about themselves and their meal choices. Consumers might opt to visit the ‘healthy’ restaurant, but be wooed by the not-so-healthy “limited time offers” (LTOs) at these places.

Trend #3: Transparency Consumers want to know what they’re eating, and the recently passed healthcare bill mandates such disclosure. Restaurants with 20+ units are now required to list calorie counts on their menus.

Consumers seem happy with the impending disclosure, as 61% agree that restaurants should post nutritional information, like calorie counts and fat grams, on menus.

Trend #4: Indigenous Ingredients While the local food movement continues to grow, the push toward indigenous ingredients takes that trend a step further.

In 2011, we will see restaurants incorporating more traditional or authentic ingredients to their ethnic or globally-positioned entrees. “Local” as an ingredient marketing claim has grown by 15% from Q2 2009 to Q2 2010, and it’s likely that number will increase in the coming year.

Trend #2: Automated Menus Convenience and technology will form the perfect union this year as restaurant-goers will see an increase in automated menus at their favorite establishments.

These electronic order-takers will provide customers with the opportunity to order food to their specifications in do-it-yourself style, thus reducing the restaurant’s reliance on front-of-house staff, as well as full-time employees.

Trend #5: Exemptions to the Rule A vast majority of restaurants will have to disclose calorie counts on their menus, but that rule doesn’t apply to LTOs. Operators will take advantage of this loophole by offering less-than-healthy novelty or seasonal menu items, allowing customers to indulge in a guilty treat, without feeling pressured to make a healthier menu choice.

As it stands, 43% of consumers say they’re likely to change what they order when calorie counts are listed on the menu. LTOs allow consumers the occasional opportunity to indulge in a meal out.

Looks like consumers will continue to talk the talk. But, forget about walking the walk! Most folks want to know that they could eat healthy, good food if they wanted to; they just don’t want to right now.