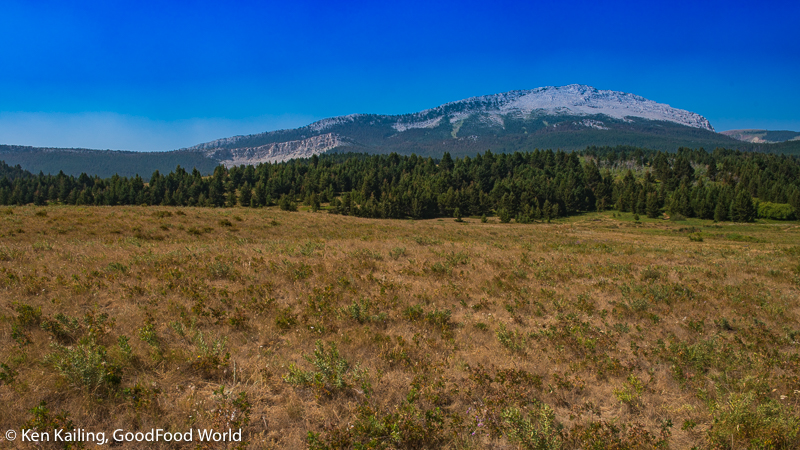 (View the day’s photo collection here. Click on any image to launch the slideshow.)

It was a hot and hazy August day when we drove 15 miles due west of Augusta, Montana, into the rolling hills where we glimpsed the foothills of the East Front of the Rocky Mountains and the edge of the Bob Marshall Wilderness. As we passed the Nilan Reservoir, we edged further into drier ranch country.

Ordinarily on a late August morning, you wouldn’t find a couple of dozen people in seed caps and brimmed hats gathered on a sunny hillside in west central Montana just for a chat. We were there to learn!

The day’s event, Day on the Range, hosted by the Lewis and Clark Conservation District (LLCD) and the Natural Resources Conservation Service Montana (NRCS MT), addressed an array of topics to both educate and enlighten ranchers and farmers – and a few lay people like us.

So, who exactly are the NRCS and the LLCD? The NCRS, founded in 1935 during the Dust Bowl and originally called the Soil Conservation Service, was created to help conserve soil and water resources and prevent their loss on farm, grazing, and forest lands. At the county level, the Lewis and Clark Conservation District (LCCD) provides land owners local assistance and access to technical and financial resources to protect soil and water.

Together they help local farmers and ranchers steward their land resources and conserve water and soil so they are preserved, protected, and improved for future generations while supporting those who work the land today.

Chris Evans, District Administrator of the Lewis and Clark Conservation District, warmly welcomed us all, passed out beverages and snacks, and quickly summarized the topics of the day and the presenters:

Range Monitoring – Why and How?

Range monitoring is exactly as it sounds: a way to collect quantifiable data over a period of time to measure grazing impacts and set goals and objectives for animal performance and the health of the land.

For non-ranchers, it sounds so simple! Cows eat grass, so find rangeland for grazing and turn them loose. Hold your horses, as the cowboys used to say!

Poorly managed rangelands – in general, those that are over-grazed – result in poor water infiltration and high runoff, and the presence of weedy species. Goals for healthy, well-managed rangelands may include some or all of the following:

Photo monitoring is one of the simplest methods to capture range conditions and to store and compare changing conditions over time. And if you’re like most of us, you’ve got your cell phone (and its built-in camera) with you at all times. Follow these steps and document your current and future conditions:

As Jim Olson says, “Monitoring can be easy, doesn’t take much time, and you can always call if you need help.” Get a copy of Jim’s Range Monitoring Handout.)

Controlling invasive plants used to mean spraying herbicide and hoping for the best. Today, more and more ranchers and farmers are looking for new ways to control invasives without using more chemicals. Now there is an alternative: biological control or “bio-control,” which simply means using the plants own enemies against them.

Spotted Knapweed (Centaurea maculosa), a member of the aster family, is a rangy plant with small blue flowers and faintly resembles a thistle. At first glance it appears to be delicate and attractive; unfortunately, it has invaded much of the western US and Canada.

A perennial plant with a life expectancy of about 4 years, Spotted Knapweed is able to out-compete native plants – and crops – because it has a long taproot that sucks up water faster than shallow-rooted neighbors, it produces a LOT of seed (as many as 1000 per plant each season), and it’s not very palatable to livestock so they prefer to eat other plants instead. Knapweed may also be allelopathic; that is, it releases toxic biochemicals that can limit the germination, growth, survival, and reproduction of other plant species near by.

There is a long list of herbicides that can be used to treat Spotted Knapweed. For those who want to limit chemical use, there are a few insects that prefer to lay their eggs on it and slow its growth or destroy it.

The knapweed root weevil is established in Montana, and it feeds on ONLY knapweed. We almost wanted to clap for the funny looking little beetles doing their part to control noxious weeds!

Melissa Maggio-Kassner not only demonstrated how to monitor the number and size of plants in a field, she passed around a container of knapweed root weevils and described how to collect and release more as colonies get established.

The female lays eggs on the root crown of the plant. When the eggs hatch, the larvae burrow to the center of the root where they overwinter and in spring tunnel out as adults. The more eggs and larvae in a root, the more damage is done to the root which slows down the growth of the plant. The tunneling in the root can also expose the plant to bacterial and fungal infections.

The tiny little knapweed root weevil can do a lot of damage under the right conditions. And then, who needs to spray?

While we sheltered under an open tent to keep out of the sun, Susan Tallman displayed examples of various soil qualities – compressed, open-pored, and something that resembled cement. Healthy soil contains more carbon and microbial material and, with the right range management or farming techniques, has a texture that can absorb moisture.

A rainfall simulator made it very clear how different management techniques can prevent run-off and improve moisture absorption. Four soil samples were incorporated in the simulation: a fence row sample (never plowed or grazed), no till sample include a cover crop, a tray of bare soil that represented fallow tilled soil, and a sample of grazed pasture.

The simulator consists of an oscillating sprinkler which showered water over all the samples like a heavy summer rainfall. Jars hung in front of the simulator collected the run off, and jars hung underneath collected any water that was not absorbed through the soil. It quickly became obvious that the fallow tilled soil had a lot of run off and the fence row sample, which had never been plowed or grazed, captured the largest amount of water.

As a final test, Susan turned the tray of fallow tilled soil over on the ground. Because it was the soil that had the most runoff and absorbed the least, it was bone dry!

Watch a short video of the rainfall simulator in action.

Or see the whole contraption in action here. 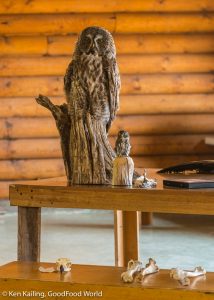 Montana is home to 15 species of owls, and Ryan Schmaltz presented not only fascinating information about owls and other raptors, he displayed two preserved birds comparing the largest Montana owl – the Great Gray Owl – to the smallest – the Northern Pigmy Owl.

Ryan passed around samples of bird wings showing the difference between hawk and owl feather arrays. Owls are silent hunters and their wings have specialized feathers that prevent the “whooshing” sound that most other bird wings make. Their soundless flight, especially at night, makes them very effective hunters.

We handled preserved feet to compare talons of different sizes and shapes, examined owl “pellets” (regurgitated waste containing anything undigestable), and compared bird bones. Ryan passed around a long bone from a pelican and a similar-sized bone from a mammal. The bones are very different in weight and clearly demonstrate why Pegasus, the mythical flying horse, should never have been able to get off the ground!

As a “grand finale,” Ryan brought out a live Short Eared Owl for all to see. The bird calmly surveyed the room full of people without ruffling a feather. Fish, Wildlife, and Parks’ Montana Wild facility rescues and rehabilitates raptors, and occasionally one is either too injured or too habituated to humans to be released in the wild. Those birds become part of the facility’s educational programs.

It Takes a Village

Farming and ranching can be lonely work and coming together on Range Days and Field Days means connecting with old friends, meeting new friends, and learning more about the vocation (avocation) you’ve taken on.

Agencies at the county level, like the Lewis and Clark Conservation District, are on the ground with you. They understand your land, your pastures and fields, your soil, and your farming and grazing methods.They are good neighbors and part of the “village” that contributes to your success. Take the opportunity to get to know them better!

When you want to explore new business opportunities, whether it’s direct marketing your products or partnering with a distributor or food processor, GoodFood World is part of the “village” ready to assist too. Want to chat, ask questions, or talk about opportunities? Just drop a note and we’ll get back to you!