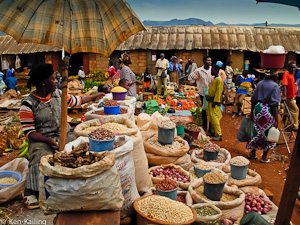 Located in the “hinge” of sub-Saharan West Africa, Cameroon is home to about 19 million people. Because the country’s natural resources are suited to agriculture, an estimated 70% of the population farms. As in all of Africa, vegetation in the region is complex and rich in its biodiversity.

The cropping systems that evolved are also complex; a smallholder farmer may grow ten or more endemic species and varieties within species in his or her garden and fields. Most of the farming is at the subsistence level – local farmers using simple tools.

Sadly, Cameroon is listed by FAO (the Food and Agriculture Organization of the United Nations) as a low-income, food deficit country (LIFDC) with poverty affecting 64% of the rural population. It is subject to the same structural imbalance that exists throughout the “underdeveloped world” where, ironically, developed countries like the US and members of the European Union seek to expand their own food security through globalization. Many countries dependent on food imports, like Japan, India, Korea and Egypt, for example, are looking to gain control of property in those same underdeveloped countries.

For years, multinational corporations have maintained control of the markets for traditional products like bananas, cocoa, oil palms, tea, coffee, sugar, and tobacco, keeping payments to farmers low. At the same time support agencies dump surplus commodities in the form of food aid. As a result, subsistence farmers can’t compete, can’t access markets, and in the process of trying to stay alive, deplete their own resource base further degrading the environment.

In the end, they are driven off their land and into slums in cities while outsiders rationalize remedies through industrialized means, such as chemical fertilizer, patented genetically modified seeds, and other methods of capitalizing on top-down control.

External forces of globalization are now putting pressure on African countries such as Cameroon to shift agricultural production from subsistence-scale local production to large-scale commercial production.

Nonetheless, Africa remains the last bastion of biodiversity and an expansive food cultural that stretches the imagination. Food is a key part of its history, where culinary practices are integral to understanding its people and necessary for its long term social, economic, and environmental success. Cameroon is no exception.

In 2007, Antonio Re, one of our contributors, traveled to Cameroon as a health volunteer at St. Elizabeth Hospital in Shisong, which is located in the northwest part of the country. During his stay, he experienced local food and local production in a system that may be at risk. Here’s his story.

June 2007 I arrived in Cameroon, a country with 200 linguist clusters and 2 national languages. One would think conversations around food would be complicated, but the language of food is the language of abundance.

This was my second trip to Africa, and my first to Cameroon, and I was totally unprepared for the variety, quality, and quantity of the food. Lying close to the equator, Cameroon has two growing seasons, and one of its chief exports is food.

No space is wasted, gardens are planted both in front and behind the houses. Corn is a common crop, and in many parts of Africa it is ground into flour for the production of fu fu, a dish similar to couscous. It is eaten – with bare hands – mixed with seasonal vegetables.

Everywhere people were selling food, and pineapples, oranges, avocados and other local foods were available at roadside stalls.

During my month of service I ate meals prepared from food grown in local gardens or on local farms, food that never traveled more than a mile to arrive at the table.

In exchange, I had the pleasure of offering my culinary skills to my gracious hosts and shared some of the dishes of my native Italy. On one occasion after a bountiful potato harvest, I made gnocchi (potato dumplings). We created the dumplings by mashing the potatoes and flour together and ate them with a sardine sauce. It was fun and we produced a dish that my hosts had never eaten before.

On another occasion I taught my hosts the art of making fresh pasta, a simple dish that requires only flour and eggs, and a passion for cooking.

We prepared the pasta in the “bush kitchen,” an open space that looked out on the garden and behind were palms and eucalyptus trees. The flour was grown locally and purchased from a local market, and the eggs came from a nearby chicken coop.

The process of making pasta is very easy. The flour and eggs make a dough that can be cut and shaped and cooked easily even in an outdoor kitchen.

The joy and the bond that was formed from working together is timeless and remains with me today. I recall the laughter and the sharing as we prepared food; we spoke of our families, our connection to things that are much bigger than any one person, the world, and, of course, the natural joy that comes from preparing and eating food.

As a departing gift, the night before I left, I was given fried banana chips for my journey home, “to sustain you and to remember us.” Those chips were a reminder of the fantastic taste of locally grown and prepared food. Every morsel was Cameroon, and it changed the way I view food today.

All property will be transformed from smallholdings into large industrial estates connected to large far-off markets. Farmers will never be real farmers again.

Rather, they will become factory workers, growing food that mostly feeds someone else rather than their own families while feeding themselves with unhealthy “food aid” surpluses.

For more information: Africa Can Feed Itself

All photos © Antonio Re