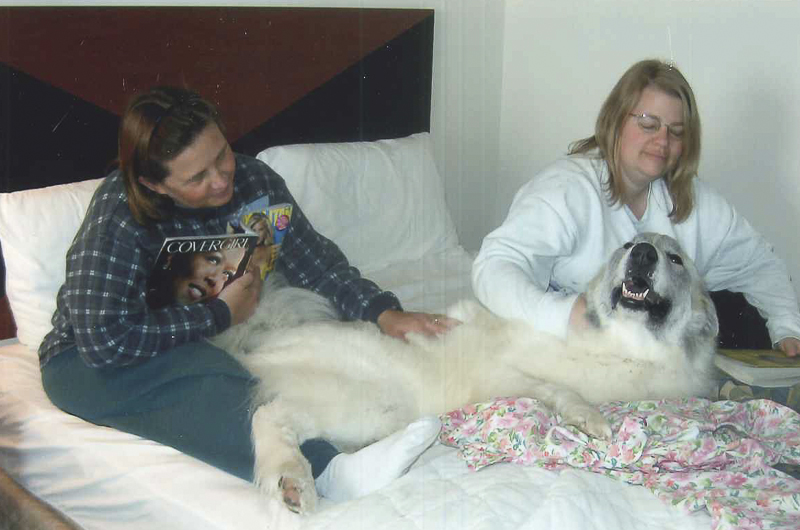 February: Following the loss of Red Rover, Lisa had been encouraging me to start looking for a new guard animal. However, I was still depressed at the death of the little alpaca, who had entered our lives for a charmed period, which ended badly. I was reluctant to pursue the search for a replacement.

Then one day Lisa emailed that I should look at “Pet-Finders.com,” as there was a dog there that I should see. Eventually, I went to the website, and was not too enthused about reviewing the pictures of dogs up for adoption. I went down the list, thinking, “nice dog”, “nice dog”, etc. When suddenly a dog’s picture fairly jumped out at me, and I thought, “That’s the one!” Upon checking with my daughter, it turned out we had both picked out the same dog, probably because her head did resemble Sheba’s to some extent.

In due time, I sent an email to “All Creatures Sanctuary” in West Texas, where the dog was, expressing an interest in adopting the dog. I received an enthusiastic answer from her caregiver, who felt that this was a very special dog, and that I sounded like the perfect fit with her. The dog was a cross of two of the large live stock guardian breeds, the Great Pyrenees and the Anatolian Shepherd. Our previous guard dog, Sheba, was an Anatolian Shepherd, which, of course, predisposed me toward adopting this dog.

She was an un-neutered female and would need to be spayed before they allowed her to be adopted. However, when they took her to the veterinary to be neutered, it was discovered that she was running a temperature. After more checking and testing, she was diagnosed with having contracted “Valley Fever,” a disease affecting animals and humans in an area of west Texas, New Mexico, and Arizona. It is a non-contagious disease, but very serious if not caught early, and requires a long period of treatment. So, it was thought that the adoption would need to be postponed for several months while she underwent treatment. Soon, she was progressing so well, that the vet agreed she could travel to Minnesota, but would require daily medication for another couple of months. Then she would be tested for Valley Fever and if she tested negative, she could be spayed.

After some thought, I agreed to this plan, but there remained the problem of transporting her from West Texas to Minnesota. Pet-Finders has networks for moving dogs around the country, but with her need to be medicated daily, her large size, and other considerations, it was decided that transport by car was the most advantageous possibility.

Whereupon entered my heroine, my daughter, Lisa, who volunteered to drive to West Texas and transport the dog, known as Queenie, back to Minnesota. So she arranged to take some time off from her job, I wrote her a check to cover expenses, and on February 23, she and two friends, Becky and Stacey, took off for Texas… just ahead of a huge blizzard! They scooted ahead of the storm all the way to Dallas/Fort Worth, where they then detoured to San Antonio, and took a few days to rest and enjoy some warm weather, do some birding and sight-seeing, before heading up to the Big Springs, Texas area where Queenie was at the “All Creatures Sanctuary.” They picked her up and headed for home, just as the next big storm was getting wound up to start heading this way!

In early March, on the first day of their trip home, they got as far as Emporia, Kansas, where tornadoes were exploding all over the area, and they holed up in a motel for the night. They rose early the next morning, and again took off for home, hoping to make it by late afternoon. They got as far as Des Moines, Iowa, where unfortunately, I-35 was closed from Ames, Iowa, to the Minnesota border. Again they had to find refuge in a motel. They were fortunate that they had no trouble getting rooms with the huge dog in tow, and she drew a lot of attention from people who remarked, “What a beautiful dog!” She behaved well, other than giving them some strenuous exercise trying to keep up with her, when one or the other of them took her out on a leash to do her “doggie duties,” as she was very strong and dragged them hither and yon looking for the right spot!

It was the end of the week before they could get back on the road, and it was still pretty dicey driving. Once they reached the Minnesota border, they went on to Minneapolis to get Becky and Stacey to their respective homes. Lisa and Queenie spent a day resting  at home with Chris (Lisa’s husband) and the Dibble menagerie before bringing Queenie down the home stretch to our farm in southeast Minnesota.

So the beautiful Queenie arrived! All 63 pounds of her, and still 30 to 40 pounds underweight! Her name was in the process of being changed; I was voting for the formal name of “Storm Queen,” due to the conditions that surrounded her arrival. It could be shortened to “Stormy” for everyday use. She was snowy white, with a grey head, and Sean said she reminded him of a Polar Bear, and voted for the name “Polara.” I protested that had too many syllables, and began singing, “Volare!” but my kids both protested that! My daughter thought “Pooh Bear” would be a good compromise, and could be shortened to “PoohBah” for calling purposes. That was the name that finally won out. It fit her very well! It was reminiscent of Sheba, her predecessor, and we hoped she would serve us as well!

On the following Monday morning, I got up early and ran to the barn to make a quick check on the pregnant ewes. No babies yet and I was thankful. The advent of PoohBah had usurped center stage from the pregnant ewes and I could use a few days reprieve from the imminent lambing season!

I fed the ewes their grain and ran back to the house to take Pooh Bah for her morning exercise. I put her stout leash on and headed out through the back yard down toward the lower end of the windbreak and the entrance to the North Pasture. There was a sturdy gate there and I intended to turn her loose in the pasture where she would have several acres to run in and get her exercise without me keeping a leash on her and being dragged about. I had at the time a very bad hip in need of replacement and handling her on a leash was a bit of a stretch, to say the least. It was quite obvious the PoohBah’s first year of life had been devoid of socializing or any training whatsoever.

Tar Baby, our young black lab, who was of course along on this outing and having lots of fun in the deep snow, suddenly took off around the end of the windbreak. Whereupon PoohBah lunged ahead to follow him, dragging me with her at breakneck speed, until I could no longer keep up and plunged face first into a huge snowdrift. Before I could even think of trying to get up, I found myself being rolled on by 63 pounds of dog who happily thought that I was playing in the snow with her! It was so much fun, that when I finally did manage to get her off me and regain my feet, it was all I could do to keep her from leaping on me and knocking me down so we could repeat the whole scene again!

Once more, the old saying, “If it doesn’t kill you it will make you tougher!” And I think by that point I should have been plenty tough enough!

2 thoughts on “Voices From the Farm: A Heroic Rescue Trip and the Storm Queen Arrives”