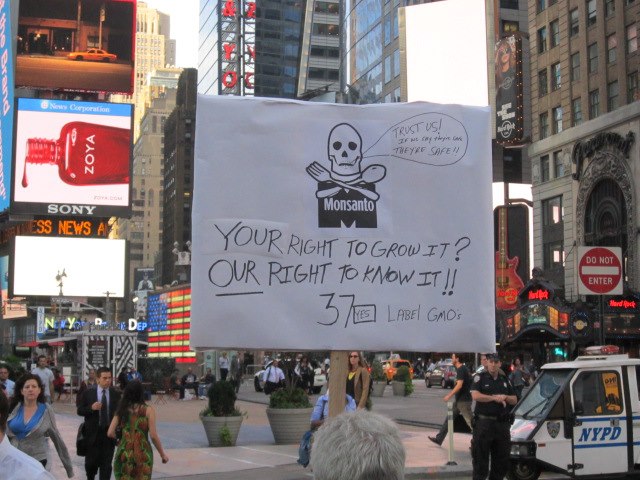 On Monday morning, 9/17, I went to New York City with sign in hand to stand with others in solidarity against the use of unsafe GMO technology and the horrific practices of its most powerful progenitor – Monsanto. My destination: Times Square, in front of Good Morning America’s studio.

For months, either Occupy Monsanto or Food Democracy Now! has sent me weekly, sometimes daily, updates about organizing for the week of September 17th as THE global demonstration week of Occupy Monsanto (coinciding with the anniversary of the Occupy Wall Street movement). Yes, included in these emails were those about Proposition 37, the paramount piece of legislation that will HOPEFULLY pass in California this November, requiring that GMOs be labeled on our foods as part of our consumer right-to-know information.

With all this lead-up, I was anticipating a more robust Monday turnout when I went to the Occupy Monsanto demonstration. After all, when I attended the Farmer’s March this past December, there were hundreds and hundreds of people in attendance (though it was on a Saturday)!

I was met by five other protestors at 8am. You heard me right: 5!

Now I know there was a crowd gathering simultaneously at Zuccotti Park for OWS, so perhaps that usurped some food people from attending Occupy Monsanto, but come on, this is NYC… the BIG APPLE! I really expected more than the handful of us who showed up. It threw me off kilter and gave me another wake-up call I did not like.

Perhaps Monday morning is not the best time to stage demonstrations, even though this is the food fight that can shape the century. Perhaps activism through social media will suffice in setting the wildfire of protest ablaze across the country, sustainably enough to battle the expensive propaganda campaign that is raging against Proposition 37.

According to Food Democracy Now!, to date, Monsanto and other “giant pesticide and big food companies have donated more than $32 million to defeat ‘Yes on 37‘ to label GMOs in California. Earlier this spring, the Grocery Manufacturers of America (GMA), of which Monsanto is a leading partner, declared that defeating Prop 37 was its single highest priority for 2012.”

SO WHAT’S MY FEAR?

It’s that too many people still don’t know what GMOs are, and they will get hoodwinked even more by the wave of anti chicken-little-quelling commercials that are downright lies. There are millions of people who are unaware that GMOs are a deadly gamble for our planet, unhealthy for the animals fed a GMO diet (from corn, alfalfa and soy) and unhealthy for those who ingest these animals and/or products made from GMO foods (which also include sugar beets and canola).

They don’t know that since their introduction in the 1990s, GMOs have managed to silently infiltrate America’s mainstream processed food system, including animal products. GMOs ARE NOW UBIQUITOUS, invisible, and unlabeled because there have been no federal regulations requiring that manufacturers include that information.

Why scare the public into a frenzy when America’s entire food system is based upon cheap abundance and consumers’ unquestioning acceptance?  We’ve been trained to keep buying for, and entertaining, our pie-holes.

After all, Americans add billions of dollars to the economy in healthcare tolls paid on the other side of digestion. I can imagine a closed-door conversation between food and pharmaceutical CEOs, executive board members, gastro scientists  and geneticists laughing it up saying, “They’ll eat anything we advertise to them… just make it big, sweet, colorful, cheap, fun, easy, salty, and fatty. Oh, and make the advertising look like it’s natural. And then, we can sell them all those pharmaceuticals to counteract their food allergies, immune disorders, obesity, diabetes, and depression.”

Look, I don’t want to come down on people who are just trying to do their job, feed their families, and have a decent life. But there comes a time when a society needs not only to do a cradle-to-grave and global cost/benefit analysis, but take a moral and ethical stance. Of course, what makes up the variables in the equation is reflected in the inherent values of the analysts. And when power or greed rules the equation, I think the variables are skewed.

Foods with a GMO ingredient comprise 70% of the average American supermarket shelves and freezers. Unless you purchase alternative foods, USDA certified organically grown (which doesn’t allow GMOs to be present as an ingredient), or foods labeled as “NON GMO Project Certified,” when you eat a processed food it is most likely made with a GMO-derived ingredient.

When you see corn as an ingredient in the form of: flour, meal, oil, starch, syrup, and sweetener, it’s GMO corn. Also when you see the words fructose, dextrose and glucose. GMO soy comes in the form of: flour, oil, lecithin, protein, isolate and isoflavone. Sometimes it is called just vegetable oil or vegetable protein. Sugar from sugar beets is also a GMO product, and reads as sugar or pure sugar. Pure “cane” sugar is from non-GMO sugar cane, not GMO sugar beets.

AND IN THE END

I left Mondays’ demonstration by mid-morning. I walked 10 blocks back to Penn Station, feeling alone and naked, holding my sign high for all to see. I was remembering a part of Dr. Mercola’s interview about glyphosate (the dominant ingredient Roundup Ready GMO crops are altered to tolerate) with Dr. Huber, an expert in the toxicity of genetically engineered (GE) foods, soil-borne diseases, microbial ecology, and host-parasite relationships.

When Dr. Mercola asked which toxin Dr. Huber would prefer to use if he had to make a choice between two evils, Dr. Huber says he’d take DDT over glyphosate any day, which silenced Mercola and brought him to tears.

“A lot of these materials can have a very beneficial use. I’m certainly not anti-chemical. But we have to use some common sense. What we have with glyphosate is the most abused chemical we have ever had in the history of man,” said Huber. (http://articles.mercola.com/sites/articles/archive/2012/01/15/dr-don-huber-interview-part-2.aspx)

IS THE GMO SKY FALLING?

I don’t know for certain. But I do know as I wrote in the article It’s GMO War: The Monopoly vs. the People, if an ingredient isn’t identified as a GMO, it won’t be traceable. It’s not visible.

From the point of view of risk management and epidemiology, how could we as individuals and a nation possibly track health problems if they arose? We wouldn’t be able to. Animals and people would just keep getting sick, and we’d throw up our hands and just say…?

Can you call that good science, good health policy, protecting the people?

PA-LEEZE GET INVOLVED AND ACTIVELY SUPPORT PROPOSITION 37 IN CALIFORNIA. DEADLINE IS SEPT 30th. (http://organicconsumersfund.org/donate/david-goliath.cfm) Do it through your social media, especially if you cannot show up in person. But when you can, consider also showing up in person. It’s visible to those who don’t know the sky may in fact be falling big time.