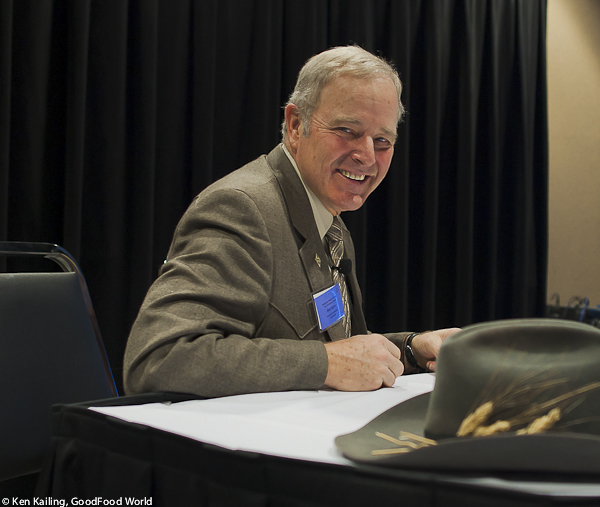 For those who are trying to farm in the Palouse region of eastern Washington, northern Idaho, and northwestern Montana, there is only one name for it – Dryland Farming. Annual rainfall levels of 8 to 16 inches mean that farmers have to be good – very good – at moisture management.

The day before the 2011 Tilth Producers of Washington Conference, a full day was devoted to a symposium to help discover the opportunities and meet the challenges of Dryland Organic Agriculture.

(Attend the conference “virtually” by viewing this slideshow.)

The symposium began with a keynote presentation by Bob Quinn, owner/operator of Quinn Farm and Ranch, and founder of Kamut International, who said: “I feed the soil, not the plant.”

Quinn’s 3600 acres are certified organic, and it is organic farming that makes dryland farming successful. Organic rotation focuses on cover crops and green manures that are crucial to moisture retention, soil fertility, and weed management.

These dryland farming methods have made it possible for Quinn to build a highly successful marketing company that sells KAMUT® brand khorasan wheat around the world.

Mentoring other young farmers is also part of Bob’s farming principles and he has been a strong influence on many.

Casey Bailey raises organic KAMUT, winter wheat, and hull-less barley on his 1600 acres that lie alongside 3000 acres belonging to his father. He is slowly converting these rolling hills outside of Fort Benton MT to organic crops.

Armed with two college degrees, Casey mixes new ideas with traditions, high tech with low tech. For example, he harvests his crops with a combine that has an on-board GPS. It is possible to capture the data as he plows an exact north/south transect at the beginning of the season, and then, when it’s harvest time, that data is used to drive the combine with no input from a operator. At the same time, special sensors weigh the grain as its harvested and continually check the moisture in the seed.

Jacob Cowgill, Prairie Heritage Farm, Conrad MT, who was at one time one of Bob Quinn’s assistants, also grows a variety of grains and legumes in an organic rotation. Jacob has farmed on his own for only a few years, yet he is continually using Quinn’s methods to experiment with a wide diversity of crops.

Daryl Lasilla and his wife, Linda, own Daryl Lasilla Organic Farms just outside Great Falls MT on about 1000 acres. Linda Lasilla is well known around Great Falls for her lentil chocolate cake!

The soil here is rich, black, and heavy with clay and the topsoil is nearly 100 feet deep in places. Daryl raises organic buckwheat, winter wheat and spelt. His spelt crop was so successful – chest high under extremely difficult conditions – that neighbors farming conventionally asked for Daryl’s advice.

2011 was not a good year for buckwheat! The vagaries of weather brought a long cool wet spring that delayed planting and germination by nearly a month. Once the seeds were in the ground, the rain simply stopped and for the next three months none fell. The growing season ranges from 100 to 120 days – just enough to get a crop in if the weather cooperates.

More than 100 miles to the east in Lewistown MT, Ole Norgaard, North Frontier Farms, faced the same weather challenges in a part of the state that has very thin, alkali soil. Ole harvested a good crop of triticale this year but his specialty, black corn, came a cropper.

The cool wet spring and summer drought brought his corn to a halt. Plants that would have borne 10- or 12-inch cobs full of jet-black kernels in a good year, produced nubbins no more than 5 or 6 inches long.

Norgaard will soon be marketing North Frontier Farms Heritage Black Corn and has built a “portable” bagging, packing, and shipping operation on his farm. His black cornbread mix produces a cornbread that is almost like cake in its texture and taste.

David Oien, CEO, is one of the original founders of Timeless Seeds, a company that started selling organic grains and seeds before consumers knew the definition of “organic” or “lentil.” He offers lentils in colors ranging from yellow and red to brown and black, purple barley, black chickpeas (garbanzos), and golden flax. His grains are as nutritious as they are colorful: the darker the color of the seeds, the higher the level of antioxidants.

Indian rice grass (Achnatherum hymenoides) is a sturdy grass bearing an airy collection of fine seed heads on delicate stems. While much admired for its ornamental effects, Indian rice grass is tough and grows especially well in dry, sandy soils. Most of it is grown as a conservation measure to prevent wind erosion.

Grains of the future

Back in the Palouse, researchers like Kevin Murphy, Washington State University, Pullman WA, are experimenting with new crops for dryland farmers. Murphy has been growing quinoa in test plots on university grounds and on a half-dozen farms in Washington and Oregon. He is testing a wide range of varieties – mostly from Europe – and is developing new hybrids that will grow well so far north of the equator, in very dry areas.

Quinoa is called a “pseudocereal” because it is not a member of the grass family, but is closely related to beets and spinach. Originating in the Andes, quinoa has become extremely popular in the US. Demand has actually caused the price of the grain rise so high that farmers who have grown it for thousands of years can no longer afford their own ancient grain.

Why is organic so important?

We all know that we should eat more whole grains; everyone from the USDA on down is telling us that. But no one seems willing to tell us that the real key is organic whole grain.

Because conventional grain growers use a huge amount of herbicides to keep the weeds out of their fields and – something most of us don’t know – use even more to “desiccate” (dry out or kill) the plants in order to control the timing of the harvest.(1) Even with the biggest, most sophisticated equipment, it is important to be able to stagger the timing for efficient harvesting.

Herbicides for weed control and desiccation – those approved for “pre-harvest application” – unfortunately can remain on the grain. As can fungicides and pesticides applied to keep the grain from spoiling or being consumed by pests while in storage.

Grains are not washed before milling so the whole grains, berries, groats, flakes, meal, or flour are likely to contain some level of chemicals.

Eat organic – it’s the only way to prevent ingesting those chemicals!

The future of dryland farming

These farmers and researchers – and the companies processing and marketing their products – depend on knowledge, experience, and training to be successful at “moisture management.”

Events like the Dryland Symposium are a combination classroom, brain trust, and reunion those trying to farm in the Palouse region of eastern Washington, northern Idaho, and northwestern Montana.

Learning from each other – the mistakes to avoid and the successes to repeat – links these “grain men” (apologies to Grace) into a closely-related community. Young farmers like Casey and Jacob learn from experienced farmers like Bob Quinn, Daryl Lasilla, and Ole Norgaard.

And together they are all trying new varieties, experimenting with crop diversity, and exploring new grains and pseudograins to ensure that it is possible grow healthy crops even in dry climates.

As climate change continues to affect agriculture around the world, it is farmers like these who will be able to adapt and succeed.

GoodFood Hero: Bob Quinn, Montana Grain Farmer
Heirloom Khorasan Wheat: From 36 Grains to 35,000 Acres
On the Road: Montina
On the Road: Out in the Fields
On the Road: Purple Barley, Black Corn, Black Lentils, and Black Chickpeas
On the Road: Quinoa and Teff