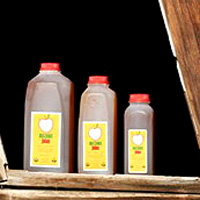 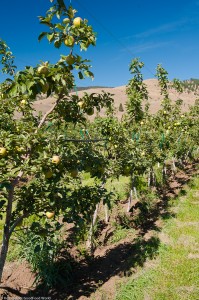 We took a “drive about” to apple country and met John and Beth Sinclair at their organic orchard in Twisp WA. They grow Honey Crisp apples on 8,000 trees in the Methow Valley of Washington.

Washington is known for its apple orchards, however about 40 years ago, the industry was nearly destroyed. During the winter of 1968-69, after a relatively mild December, temperatures dropped to an all-time low of -48°F in Winthrop, less than 20 miles from the farm the Sinclairs bought in 2001. Entire orchards were wiped out in that freeze.

John took that lesson to heart when he started his new orchard. He planted trees grafted onto a dwarf Siberian rootstock that can withstand temperatures down to -20°F. If the weather ever approaches 50-below again, there just isn’t much anyone can do. In the meantime, these are plenty hardy trees.

We visited the Sinclairs and sampled their ciders. Sweet cider should be pasteurized for safety and John showed us their ultra-violet pasteurizer, an engineering marvel that cost-effectively eliminates any risk of common pathogens like e. coli. He has chosen this method of “cool” pasteurization over “flash” pasteurization that kills pathogens by bringing the cider to 160°F for a short time. Using heat changes the character and taste of the cider; Mazama Juice has more of the fresh juice taste.

Bottled and labeled by hand and sold as a “varietal” cider – made entirely of Honey Crisp apples – or as a blend with other apples, Mazama Juice ciders are wonderfully tasty. The Honey Crisp cider is light, fragrant, and would be excellent with any meal. The blend is a little darker with a slightly more complex flavor.

GoodFood World heartily recommends them both!