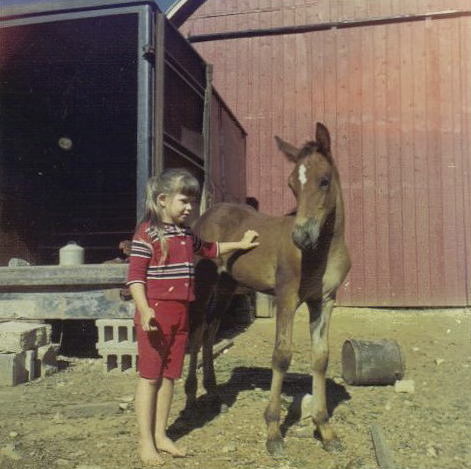 We are visited by a “Yellow Bellied Sapsucker.” There actually is such a bird, and a very colorful character he is. He stayed for a week, drilling row upon row of square holes in one of the huge Spruce trees in the back yard. Once he’d had enough sap, or whatever it was he was after, he left. About the same time, we saw an Orchard Oriole in the Clove Currant bushes, first sighting of one of these. Next the Bluebirds appeared around the yard, and in a few days, began building a nest in a deserted woodpecker hole in a stump, just below the hedge. We got to enjoy them every day!

The House Wrens were singing near me while I was setting gopher traps in the pasture below the house. The gophers had started their tunneling, and making a chain of big dirt piles in my beautiful pasture, and I couldn’t have that!

So I had to learn to set traps. I caught one the first night, but by morning Tushka and Grey Brother had dug out the trap, eaten the gopher, and I was just lucky to find my trap! That taught me to drive a stake in the ground nearby, and fasten the buried trap to the stake with a chain.

We had our first 90 degree day of the year, and toward evening a storm blew up. Most of it went around us, and we only had a few light sprinkles of rain. Then, the sun broke through again, just before sunset, and we saw a beautiful double rainbow. Lisa was out watching it until it faded completely away.

June found us fencing a new pasture to the north of the house, and beyond the lower end of the windbreak. This was a larger pasture than our previous ones, and best of all, only one side of it needed to be fenced.

The cropland above it, on the back half of our farm, was already fenced, so that covered the upper side, and the windbreak fence covered the front end, but we had to install a gate so it could connect to our previous pastures. The line fence was at the far end, and that left only the lower side, which bordered a small woods, to be fenced. Our “fencing fund” was big enough to cover that! 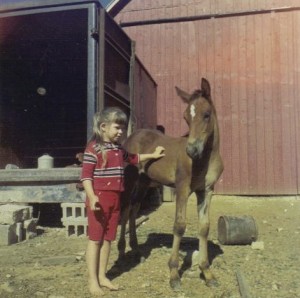 Later in the month, Lisa got to pay a visit to her “possible” future horse, a colt which was born earlier in the spring. The people who had the colt wanted Lisa to have him when he was a yearling. So, we had a year to consider it. Jerry thought she is too young to have a horse, and I tended to agree, thinking maybe it would be wiser to start with a pony. But, she was such a “horse girl,” always talking about, reading about horses, and playing with toy horses and riders… Yes, she could read, started reading at three, and I wondered how she would fit in when she started kindergarten in the fall.

July brought us to weaning time, when the new lambs were separated from the rest of the flock. All the sheep were treated for parasites, then the lambs stayed in the barnyard pasture where they also had access to a water tank in the lower barn, and feeders where they could get started on a small amount of grain to make up for the loss of their mother’s milk, which had become pretty scanty by now anyway. The rest of the flock were put into the new North pasture.

Things were pretty noisy for a day or two after the flock was separated, but then everyone adjusted, and things quieted down. I suddenly realized it was just a bit too quiet, and went to check the north pasture. There was not a sheep in sight. My first thought was that they were probably resting in the shade of a couple wild apple trees in the pasture, and I walked back to check.

They were not there. They were gone!

2 thoughts on “Voices From the Farm: On Birds, Gophers, Horses, Fencing, Runaway Sheep”