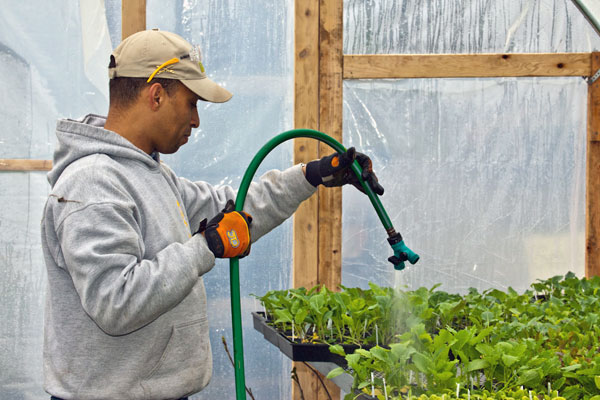 Starting over can mean different things to different people, depending on the nature of the change. It often entails a journey: physical, emotional or both. For a group of Somali Bantu refugees who have settled in the South King County part of Washington, it has been nothing less than an odyssey. Now, nearly two decades after leaving their war-torn country, they are seizing what might be their first real opportunity at creating a sustainable and secure life for themselves and their families, all while bolstering the availability of healthy food in their communities.

The opportunity has come in the form of a farm incubator program. A potent partnership between Seattle Tilth and Burst for Prosperity led to the creation of the initiative, and a signed lease with Seattle Parks and Recreation for use of the Red Barn Ranch, seven miles outside of Auburn, gave them the land with which to execute the program.

With Seattle Tilth’s and Burst’s common goal of creating healthier, wealthier communities, the farm incubator program uses a multi-pronged approach toward this end. First, there is a long-term objective to increase the amount of active local farmland and healthy food production, as the program’s farmers will eventually move away from the incubator and to new spaces. Farmland has been on the decline in past years, and consequently so has the availability of locally-grown food. A recent funding award from the U.S. Department of Agriculture’s Beginning Farmer and Rancher Development Program means that the incubator will continue to support the growth of new farming businesses for at least the next four years.

Another key to the program is that the partners are building a distribution network focused on low-income neighborhoods that are in short supply of produce. Program managers from Seattle Tilth and Burst are identifying corner stores and local markets in areas that are known to be “food deserts,” where a high number of residents are more than a mile from a market or supermarket that sells fresh food.

Last, but certainly not least, there is the educational aspect of the incubator program. Farmers receive hands-on education, mentoring, loaned tools, and even community volunteer help to get them on their way to building businesses. Participants are coached through the development of their business plans, negotiation of lease agreements and the organic certification process. Support is available to help them navigate through all the tasks essential to the operation of a successful small farm.

While the program sounds pretty tidy, the same cannot be said about the path that led this first group of participants to it. Most of the twelve, including husband and wife Ramadhan Mugasa and Fatouma Bilal, left Somalia in 1992, a year after the start of the civil war. What followed was a 10- to 12-year waiting period in the United Nation’s High Commission for Refugees (UNHCR) camps in Kenya before being granted passage to a permanent home, in this case, the United States.

Although Mugasa had farmed about ten different crops in Somalia, once in the refugee camp, there was little to do but wait. According to Ali Mohamed, another program participant, income-generating opportunities were severely limited, as the camps were far from any cities. Of greater gravity was the fight to stay healthy. With just one meal per day, malnutrition and illness were real, looming fears.

Living in a prolonged state of uncertainty, part of the refugees’ regular routine was to go to the UNHCR’s makeshift office and check the blackboard for status – had an interview been scheduled for the family? Was there an update on the case file? Or, had the chalk-scrawled words for which everybody waited appeared, and a final destination been determined?

Once in the U.S., the new immigrants still experienced several years of unpredictability. Mohamed, who married and started a family during his 12-year refugee camp stay, arrived in San Diego with his family in 2004. His first task was to learn English – no small feat for someone with a second-grade education — while trying to secure adequate employment and housing at the same time. In Seattle since 2009, the same challenges exist. Ali spends five days a week working at a Somali restaurant, three days a week in a minimum-wage home-care job, three days a week in school, and three to four days a week working at the farm. It is all part of building a new life, one that will provide greater security for his children than he had for himself.

For Ramadhan Mugasa and Fatouma Bilal, the long-term prospects of owning their own farm business are an important part of the security equation. They have made their quest for financial security into somewhat of a family affair. On the sunny Saturday that I visited their plot, five of their six children were out working alongside of them to clear the soil of large rocks. Abdi and Musa, their two eldest sons, sang snippets of Top 40 pop songs and exchanged banter common to any high school-aged kids while they worked. Fatouma, speaking through her daughter Fato, said that she likes everything about the farm – the work, the prospect of what will grow, and the help from the community. The farm program is a bright spot in what has been both an incredible and incredibly long journey.

When held up against the triple-bottom-line approach of doing business – strategies that are environmentally, economically and socially sustainable and sound – the farm incubator fits the model. It blends profit with practices that are good for the planet and its people. For the Somali Bantu immigrants who have committed to building an agricultural business – six enterprises are in work so far – it is the continued hope of creating a better life that keeps them going, even when the rocks in the soil are larger than the potatoes that they plan to eventually grow.

Learn more about the farm incubator program here. The farm welcomes volunteers from the community – every Saturday there’s a work party as well as other volunteer and internship opportunities.