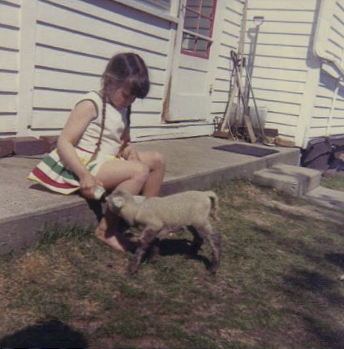 It did not take us long after bringing Charlie home, to discover “Charlie” was a female, and we rather suspected she was probably pregnant…

Which, of course, would explain why the dairy was so happy to give her to us. But that was okay, we were glad to add her to our menagerie.  She was a very sweet dog!

We did not think Charlie was a very good name for a mother-to-be, so we changed her name. We thought most people would have called her “Rags.” That was on the right track, but didn’t seem to fit her well, so we decided on “Tatters” — perfect!

When springlike weather broke out, I had dug out the cold frame, so the frozen ground below could thaw out. A few days later, I put in a good amount of aged sheep manure, then covered it with good garden soil. After this sat for a few days and warmed up, it was ready to plant with seeds for some early lettuce, radishes, and also some flowers. I had already planted peat pots of tomatoes and peppers, which also went into the cold frame to grow until they could be moved to the garden later on,

Lambing was imminent, and on April 5, the night turned very cold. Sure to Go lambed, twins again, a ram and a ewe, but the male lamb was quite small and did not survive the first night. The ewe lamb, however, was fine. She became known as “Lambkins”.

The lambings were spread out this year, and during the interval between them, I was able to get the 500 windbreak trees planted in mid April. Only one more year to go now, and the windbreak would be complete.

Sheba lambed on April 30, a single ewe lamb, “Snicklefritz.” Sheba’s milk was slow to come in however, and Snicklefritz needed supplementing for a few days. Fortunately Sure to Go had a plentiful milk supply when she lambed, and I had milked some colostrum from her and put in the freezer, so I was able to give Snicklefritz colostrum and get her off to a good start.

It is always a good idea to freeze some colostrum during the previous years’ lambing, but if you did not, then you should  milk some colostrum from the first ewe to lamb, and freeze it, so you have it in case of an emergency.

Fast on the heels of Sheba’s lambing, Tatters had four puppies, one male and three females on May 3rd. All was well, and it was an exciting time with lambs and puppies bursting out all over, but no time to just relax and enjoy it all, as on May 8, Mama gave birth to triplets! One ram, two ewes. The ram lamb was small, but lively, the ewe lambs were both good sized.

Mama, after lambing in the afternoon, “owned” all three lambs. But, true to form, by the next morning she would only own one ewe lamb… and the battle was on! We did not expect her to feed three lambs, and we were willing to feed one, but we were not going to let her get away with feeding only one lamb. Not this year!

The new headgate had been built in the manger. By adding an extra 2×4 between two of the uprights in the manger, and fastening it to the bottom of the manger with a long bolt and washers, it could be moved to make a stanchion. Mama could not turn her head to see or smell the lambs, which were put in a pen behind her. The pen was formed by cutting a hog panel into three sections and hinging them together to form three sides of the pen, with the manger being the fourth side.

This worked out very well. Since she could not tell who was nursing, she soon settled down and fed the two ewe lambs. We took the ram lamb to be bottle fed. We knew we would have to feed one lamb at any rate, as a ewe has only two teats, and even if they try to feed three lambs, one lamb will usually get shorted and not grow well.

But at least, Mama lost the war this time, and we were happy to be feeding one bottle lamb rather than two, as lamb milk replacer is expensive, much more so than calf milk replacer, because the fat content is so much higher. The rich milk is why lambs grow so fast.