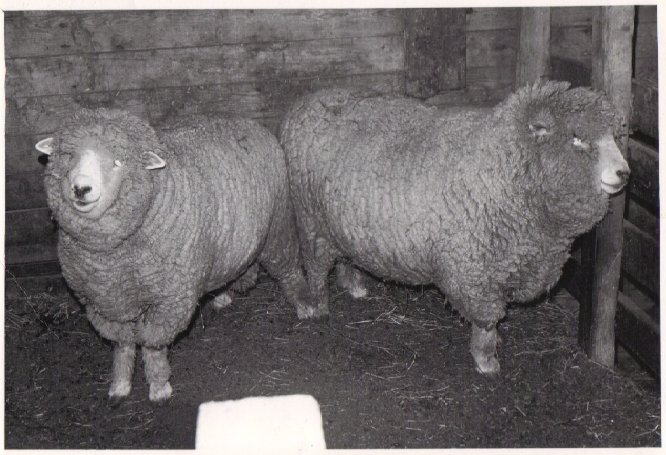 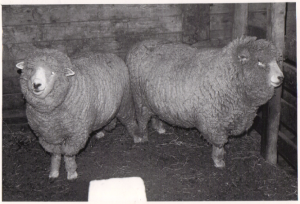 Now, I was going to have to learn to do tail docking, and possibly castrating.  I had made a prior decision not to use some of the cruder methods of removing these appendages.  Along with other lambing supplies, I had purchased an elastrator, the instrument needed to accomplish this task, and also the “0” rings that were to be applied to the tail, and/or scrotum. I would not carry out this procedure until the lambs’ second day, so they had time to adjust to their new surroundings without being subjected to further trauma, but soon enough that their pain nerves had not fully developed.

By the second morning we had decided not to castrate Seth, but to keep him as a ram.  He was a fine specimen, out of a purebred ram, and we were sure we could sell him as a ram in the future, so it only remained to dock the lambs’ tails. With a syringe, I administered a 1/2 cc. of penicillin, and 1 cc. of tetanus anti-toxin to each lamb subcutaneously. Then, using the elastrator to expand the “0” ring, I applied the rubber band to each lamb’s tail about 1 1/2 ” from the lamb’s body.  This would shut off the blood supply to the rest of the tail, and in a matter of two to three weeks, that part of the tail would atrophy and fall off.  There was very little discomfort to the lambs since this was done so early, but they would feel a momentary stinging sensation as the blood stopped circulating to the part of the tail to be docked, and they would run to their mother and nurse.  Then in a minute or two, they were okay

The reason lambs’ tails are docked is to prevent them from being subjected to ‘fly strike’ later on.  If their tails are left long, at some point those tails will become contaminated with manure as the lamb passes feces, and this will attract flies, which deposit eggs in these spots.  The eggs than hatch into larvae which eat into the lamb’s flesh and cause much discomfort, pain, and probable death if not attended to. So removal of the tails is a humane practice, but it should be carried out in the most sterile and least painful way possible. Tails should never be docked at the spine, a practice which has been outlawed, but continues to be carried out by many people who exhibit their sheep in the show ring.  This inhumane practice often causes a rectal, or vaginal, prolapse in sheep.

A few days after Sure to Go lambed, Mama also gave birth to twins, again a male and a female. But Mama had quite a number of “lambings” to her credit, and the process proceeded quite a bit faster.  All was well, both ewes had good udders, the lambs had all received good amounts of colostrum, Sure to Go’s lambs were now a few days old, Mama’s lambs were looking good, and we went to bed that night feeling very lucky and content.

3 thoughts on “Voices From the Farm: The First Lambs Are Born (Part 2)”