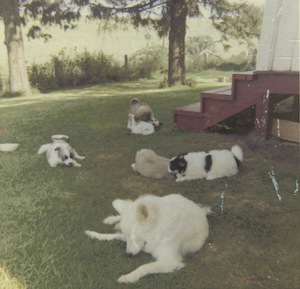 After being with us all winter, Lady was one of our growing family. However, in the spring, she was experiencing her first “heat,” so we were confining her on an enclosed porch, and taking her out on a leash to go “potty.”

One morning, Lisa was taking her for a walk a short way down our drive, when suddenly a large Collie type from a neighboring farm appeared. He had apparently been lying in the field, waiting for just such a chance, and he wasted no time in pressing his advantage! In the ensuing melee, Lady tore the leash from Lisa’s grip, and ran off across the field with her suitor, dragging the leash behind her.

A couple hours later, Lady came home, still happily dragging her leash, and we knew we would be expecting puppies in a couple months. We decided she was no lady, and changed her name to something more appropriate. Since she was a Siberian Samoyed, we chose a Russian name, “Matushka,” meaning “Dear Little Mother.”

Now, with 7 sheep… Missy, the dog… Cricket, the cat… Mickey, the canary… and the now pregnant Matushka… our menagerie was about to expand by leaps and bounds! In addition, someone had given us 6 Bantam hens and a rooster. We had our own eggs, when we could find them, that is.

Banties are experts at hiding nests in the hay mow, or a patch of weeds, or under an abandoned piece of farm equipment, or other unlikely places, and they soon come out with anywhere from 12 to 20 Banty chicks in tow. Fortunately, we had a pretty decent little chicken coop to house our flock, if only they would stay there.

In June, Matushka, which by then had been shortened to Tushka, had her puppies, four males and one female. They were an adorable bunch, two especially took our eye as they looked like little malamutes. They had the curled tail carried over their back like their mother, but they were grey with dark muzzles. not white like Tushka.

One was a male who Lisa claimed as her “Grey Brother,” the other, a female, was going to be a gift to my Dad, who had recently voiced a desire to have a dog. But we would keep her until she was old enough to be spayed, and we would take care of that before we gave her to him. We called her “Holly,” my Dad, with his back East Scottish way of speaking, called her “Hallie.”

Whatever, it was a perfect match, and they were inseparable until my Dad passed on, 9 years later, then Hallie soon disappeared. I have a feeling she went to search for her master.

The other 3 puppies were adopted, one we called “Sweet William” went to a couple who owned a dairy farm near Holmen, WI, and he got a wonderful home! “Beautiful Joe,” the brave one, went to one of my sisters. He was an excellent cattle dog, but in early winter he came up missing. They never found a trace of him, and later thought he might have fallen through the ice on their pond, as they remembered having seen him there earlier, and the ice was not that thick yet.

“Pooh Bah,” the gentle soul, went to another sister, and my nephews immediately renamed him “Genghis Khan.” Totally inappropriate casting, but they loved him! Even though Lisa had “Grey Brother,” it was very hard for her to give up “Holly,” as we kept her until after Thanksgiving, when we had her spayed and she went to my Dad. At that time we also had Tushka spayed. No more puppies! (The phrase “famous last words” comes to mind.)

2 thoughts on “Voices From the Farm: “Lady” is No Lady”